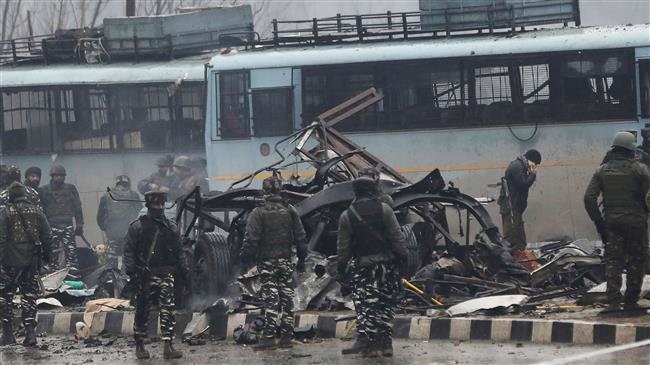 At least 44 Indian paramilitary personnel have been killed and dozens more wounded after a bomber rammed an explosive-laden car into a military convoy in restive Kashmir.

The casualties were caused after the van ripped through buses in a convoy of 78 vehicles carrying some 2,500 members of the paramilitary Central Reserve Police Force (CRPF) along a key highway in the disputed valley.

Senior police officer Muneer Ahmed Khan said the attack occurred as the convoy reached southern Lethpora town on the outskirts of the main city of Srinagar in the disputed Himalayan region. He said one bus was destroyed and at least five other vehicles were damaged by the blast.

Nearly 30 troops were injured in the blast. Videos from the blast site showed smoke billowing from the remains of one vehicle, while bodies lay strewn across the road, Presstv reported.

Mohammad Yunis, a journalist, who reached the site minutes later said the explosion was heard from several miles away. He saw blood and body parts scattered along a 100-meter stretch of the highway.

“I strongly condemn this dastardly attack. The sacrifices of our brave security personnel shall not go in vain. The entire nation stands shoulder to shoulder with the families of the brave martyrs,” Modi said.

Pakistan-based Jaish-e-Mohammed (JeM) militant group claimed responsibility for the attack in a statement, saying dozens of vehicles were destroyed in the attack.

JeM, one of the most powerful militant groups operating in the region, was blamed for a 2001 attack on the Indian parliament that led to India deploying its military on the border with Pakistan.

A spokesman for the group said the attack was carried out by Aadil Ahmad, alias Waqas Commando, a known militant from the area.

Tensions are high in the Indian-controlled region, where the Muslim-majority population stages regular protests against the Indian rule.

New Delhi has deployed some 500,000 soldiers to the region to further boost security of the borderline and enforce a crackdown on pro-independence demonstrations in its share of Kashmir, where anti-India sentiments run deep.

Indian troops are in constant clashes with armed groups seeking independence in the area.

India regularly accuses Pakistan of arming and training militants and allowing them across the restive frontier in an attempt to launch attacks. Pakistan strongly denies the allegation.

Last year was the deadliest of the current decade in the Kashmir region, with more than 200 militants killed in a counter-insurgency offensive dubbed “Operation All Out.”

Kashmir has been divided between India and Pakistan since their partition and independence from Britain in 1947. The disputed region is claimed in full by both sides, which have fought three wars over it.

Armed battles between Indian forces and militants since 1989 have killed thousands of people, mostly civilians.