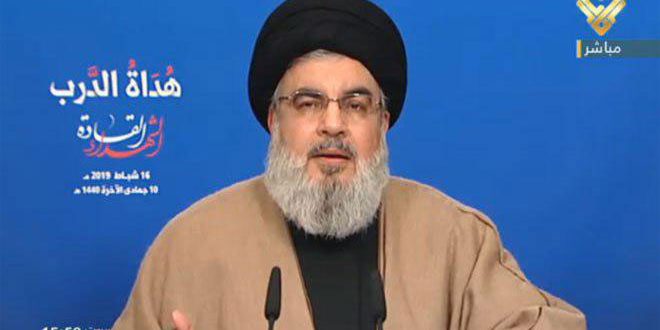 The secretary general of the Lebanese Hezbollah resistance movement says a recent US-organized conference in the Polish capital Warsaw was an attempt in vain to suffocate the Palestinian cause and isolate Iran.

“The Warsaw conference (held on February 13-14) did not give us a scare at all. Its primary goals were to isolate Iran, mobilize support for normalization of ties with Israel and pull the plug on the Palestinian cause, given the fact that no Palestinian delegate was among the attendees,” Sayyed Hassan Nasrallah said as he addressed his supporters via a televised speech broadcast live from the Lebanese capital Beirut on Saturday evening.

On Israel’s warming ties with a number of Arab countries, Nasrallah said the Tel Aviv regime’s ties with both the United Arab Emirates and Oman were no more clandestine, while stressing that the key goal of the Poland event was to publicize Saudi Arabia’s ties with Israel.

Nasrallah then noted that the US and Israel will also fail to undermine Iran as the country has been thriving over the past four decades since the Islamic Revolution.

“Having failed in their Middle East projects, the US and Israel orchestrated the Warsaw conference in the hope of playing out another scenario. Such confabs will have no effect on Iran as it continues to get stronger at all levels.

“Washington and Tel Aviv are well aware of the fact that a military confrontation with Iran would not be an easy task to accomplish. Millions of Iranian men, women and children took to the streets on the 40th anniversary of the 1979 Islamic Revolution to send a strong message to the US and Israel that they are supporting their establishment,” the Hezbollah chief pointed out.

Nasrallah said the ongoing military aggression against Yemen was a plot hatched by Washington and Tel Aviv, but being carried out by the Riyadh and Abu Dhabi regimes.

US president seeks to steal victory against Daesh

The Hezbollah chief then criticized ex-US president Barack Obama and former Secretary of State Hillary Clinton for the creation of the Daesh Takfiri terrorist group and its spread in Iraq and Syria, saying the current “hypocrite” US President Donald Trump was now seeking to declare victory over the terror outfit.

“This is while Americans created al-Qaeda [terror network] themselves and then claimed to have eliminated it. They emboldened [former Iraqi dictator] Saddam Hussein and supplied him with various weapons of mass destruction, and one day got rid of him over allegations that he had developed such munitions,” Nasrallah highlighted.

Nasrallah said the anti-Israel resistance front was the party that defeated Daesh, emphasizing that US statesmen were jumping on the bandwagon in a bid to claim the victory.

Hezbollah ready for any confrontation with Israel

He highlighted that Hezbollah was fully prepared for any military confrontation with Israel.

“We are strong enough to confront Israel, and the latter knows it. Such a fact works as deterrence,” Nasrallah pointed out.

The Hezbollah chief also strongly dismissed US Secretary of State Mike Pompeo’s allegations that Hezbollah “has active cells” in Venezuela, underscoring that his movement had no activity in Latin America.

The Hezbollah leader said Iran had frequently expressed eagerness to assist Lebanon, arguing the Beirut government had turned down such offers due to opposition from the US and Saudi Arabia.

“The lingering power outage in Lebanon is the result of political bickering. Iran could have resolved the matter with its expertise. It is unwise of the Beirut government to think that Iran wants to wrest control over Lebanon.

“The Lebanese government must not let corruption flourish, and must root out the menace. It must act lawfully and courageously, and spend public funds for civil services,” Nasrallah concluded.