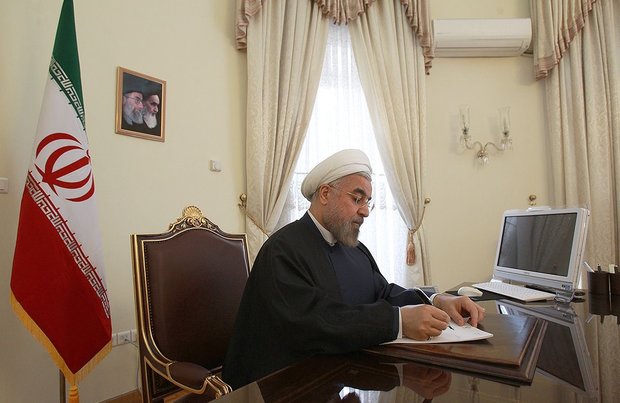 President Hassan Rouhani in a letter has rejected the resignation of Foreign Minister Javad Zarif, saying it is against the country’s national interests.

In a Wednesday letter addressed to his Foreign Minister Mohammad Javad Zarif, Rouhani wrote, “you are, according to the Leader of the Islamic Republic, a ‘trustworthy, brave, and courageous’ person standing at the frontline of the fight against the US’s all-out pressures; therefore, I refrain from accepting your resignation because [accepting] it will be against the national interests of the country.”

“I am well aware of the pressures exerted on the country’s diplomatic system, government, and the president,” Rouhani said, adding that “we will remain committed to the vow we have made to God, and I am sure we will overcome these difficulties with God’s help.”

Reiterating that the Islamic Republic’s whole ruling system, especially the Leader, have complete trust in Zarif, Rouhani urged his foreign minister to continue the path he has taken with more vigor and tactfulness.

“I am apologizing to you for all the shortcomings […] in the past years during my time as foreign minister […] I thank the Iranian nation and officials”, he wrote in his Instagram blog.

“Many thanks for the generosity of the dear and brave people of Iran and its authorities over the past 67 months. I sincerely apologize for the inability to continue the service and for all the shortcomings during the service. Be happy and worthy”, he added.

Rumors circulating in the media suggested that Zarif’s resignation was due to his absence in the meetings of Syrian President Bashar Assad with Iranian president and Leader of the Islamic Revolution on Monday. However, Iranian Quds Force’s Commander Major General Ghasem Soleimani said this morning that there has been no intention behind Zarif’s absence in those meetings.