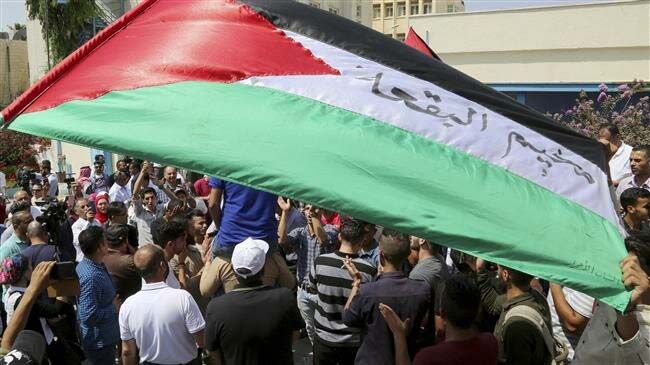 The Hamas resistance movement says the purported map of Palestine drawn up by the US President Donald Trump’s administration under the so-called “deal of the century” only represents an “illusion” long chased by Israel.

“The new proposed map of Palestine as part of the Trump’s deal of the century, no matter if true or not, is just an illusion the Israeli occupation has been chasing. The map of historical Palestine is in our hearts and the next generation will inherit it with their genes,” Hamas Political Bureau member Husam Badran said on Saturday.

He also stressed the Palestinian people’s right to return to their hometowns, from which they have been forced since 1948, saying that they would defend their lands despite challenges.

The reaction by Badran came after a report offered purported new details of Trump’s “deal.”

Lebanon’s Arabic-language al-Akhbar daily reported on Friday that the so-called “deal of the century” would see Trump pushing for Jordan to absorb one million Palestinian refugees in exchange for 45 billion dollars in financial aid.

Granting citizenship to Palestinians would happen in stages, with the largest number of refugees to be taken in at one time standing at 300,000, the report said, adding that the Gazans living in Jordan would also be included in the process.

Trump would also ask Egypt to grant citizenship to Palestinian refugees and receive 65 billion dollars, according to the report.

He would further propose that Lebanon absorb a portion of its Palestinian refugee population.

The report also said that the US plan on the Israeli-Palestinian conflict proposed forming a tripartite confederation between Israel, Jordan, and the Palestinian Authority for specific and limited purposes.

But Palestinian President Mahmoud Abbas has already rejected the peace plan because it is said to be hugely in favor of the Israeli regime.

The report said Jordan’s King Abdullah II had expressed opposition to the establishment of a joint confederation and told Egyptian leaders that he preferred Amman to remain in charge of the holy sites in Jerusalem al-Quds “without interfering in the details between the Israelis and the Palestinians.”

The deal would additionally include giving Jordan’s Naharayim and Tzofar areas — which are currently leased to the Israeli regime — to Tel Aviv. In return, Jordan would receive land from Saudi Arabia.

Earlier this week, the Emirati news website al-Khaleej Online reported that the Trump administration was likely to unveil its “deal” on the 71st anniversary of the Nakba Day (the Day of Catastrophe), in mid-May.