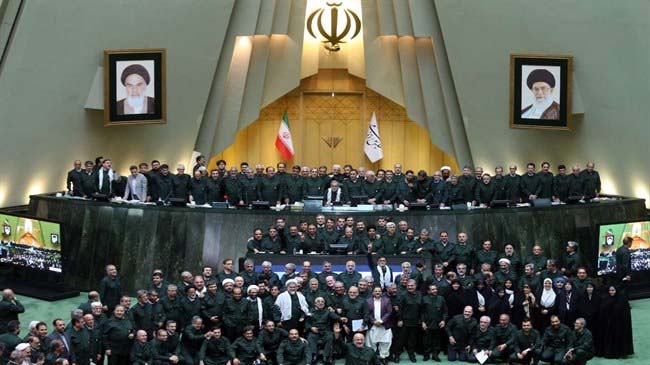 Rouhani: US ‘leader of world terrorism’

Iran struck back forcefully on Tuesday after the United States designated the Islamic Revolution Guards Corps (IRGC) as a “foreign terrorist organization”.

Leader of the Islamic Revolution Ayatollah Seyyed Ali Imam Khamenei said the US made “a vicious move” while President Hassan Rouhani branded America as the real “leader of world terrorism”.

US President Donald Trump blacklisted the IRGC on Monday – an unprecedented step that could raise tensions in the Middle East. Iran swiftly retaliated against the US move on Monday by calling America’s West Asia force, known as the United States Central Command (CENTCOM), a terrorist organization and the US government as a sponsor of terror.

Ayatollah Imam Khamenei said the designation was rooted in America’s “rancor” against the force, which has been on the forefront of the fight against enemies.

“The IRGC is the vanguard both on the field confronting the enemy on [Iranian] borders and even several thousand kilometers away [in Syria] as well as on the political battleground against the enemy,” the Leader said.

“They wish to plot against our Guards … it is in the frontline of confronting enemies of our (1979 Islamic) Revolution and has always defended the country … America has failed to block our advancements,” Ayatollah Imam Khamenei said, addressing a group of IRGC members.

He said such evil will rebound to the evildoer.

“Of course, such malice will lead nowhere; and, with their deceit rebounding back to themselves, the Islamic Republic’s enemies — such as Trump and the idiots… in the US government — are moving toward rock bottom,” the Leader said.

Ayatollah Imam Khamenei said 40 years of an all-out pressure campaign against Iran had failed to impede the country’s progress.

“In spite of all the pressure in the past 40 years, Americans have failed to do a damn thing and their vicious move will bear no fruit,” the Leader said, adding that America’s “evil designs would not harm” the force.

Iran’s power, the Leader said, comes from its people’s “perseverance, self-sacrifice, and insight.”

“The Revolution,” Ayatollah Imam Khamenei said, “will undoubtedly go on.”

Rouhani also defended the corps as a force that has fought terrorism ever since its creation in 1979.

In contrast, he said US forces have always been directly or indirectly involved with terrorist groups or acts of terrorism.

“You want to use terrorist groups as tools against the nations of the region… you are the leader of world terrorism.

“Who is propagating and encouraging terrorism in today’s world? Who wanted to use Daesh as a tool?” Rouhani asked, saying that the US is harboring the leaders of the terror group.

“This mistake will unite Iranians and the Guards will grow more popular in Iran and in the region,” Rouhani said, adding that the United States “nurses a grudge” against the Guards who have “sacrificed their lives to protect our people, our revolution”.

During his election campaign in 2016, Republican Trump called former president Barack Obama and Democratic rival Hillary Clinton the “co-founders” of Daesh, saying that they were responsible for the rise of the terror in Syria and Iraq.

“He (Obama) founded ISIS (Daesh).” Trump said at the time, adding, “I would say the co-founder would be crooked Hillary Clinton.”

It is the first time that Washington has branded an entire entity of another government as a terrorist organization, placing a powerful and expansive armed force in the same category as Al-Qaeda and the Daesh terror group. That means anyone who deals with the IRGC could face prison in the United States.

To support his statements, Rouhani cited the downing of Iran Air Flight 655 in July 1988 by missiles fired from the US naval ship the USS Vincennes.

“You have done everything imaginable. Which force was it that shot down our civil airliner in the waters of the Persian Gulf?” he said, adding that it was aimed at intimidating Iran.

Comprising an estimated 125,000-strong military with ground, navy and air units, the IRGC also commands the Basij, a volunteer force and controls Iran’s missile program. Its overseas Quds force assisted Syria and Iraq in the fight against Daesh.

The US has already blacklisted dozens of entities and people for affiliations with the Guards, but not the organization as a whole.

Trump’s move comes after relations between Tehran and Washington took a turn for the worse last May, when he pulled out of a 2015 nuclear deal between Iran and six world powers, and reimposed sanctions.

Iran’s General Staff of the Armed Forces, the country’s most senior military body, said in a statement that it “will use all its means to fight” against United States CENTCOM, and an IRGC commander on Tuesday warned the US Navy to keep its distance.

“Mr. Trump, tell your warships not to pass near the IRGC boats,” Mohsen Rezaei said.

France and China called for avoiding any escalation of tensions in the Middle East after the US blacklisting of the IRGC.

In a show of support, Iranian lawmakers dressed in IRGC’s uniforms chanted “Death to America” as they convened Tuesday for an open parliamentary session.

“America’s decision to label the Guards as a terrorist group was the climax of stupidity and ignorance of the American leadership,” Parliament Speaker Ali Larijani said.

Defense Minister Brigadier General Amir Hatami said the designation runs counter to international norms, and stems from the US and the Israel’s anger over the IRGC’s power and success in foiling their plots in the region.

He also noted that the US move flies in the face of international rules and amounts to “confrontation” with the Iranian Constitution, which has tasked the IRGC with safeguarding the Islamic Revolution and its achievements.

The Islamic Republic’s Army issued a statement, vehemently condemning the US “heinous” and “baseless” measure, vowing that it will join hands with the force in defense of the Islamic Revolution’s ideals.

The measure, it said, was rooted in the “weakness, desperation and defeat of America’s imperialistic regional policies amid the resistance front’s glorious and lasting victories in the face of the terrorist groups backed by the US and the Zionist regime [of Israel].”

The Army further denounced the move as a contributing factor to insecurity in the sensitive West Asia region and constitutes a violation of the Islamic Republic’s sovereignty.

Reuters, AFP, AP and Press TV contributed to this story.