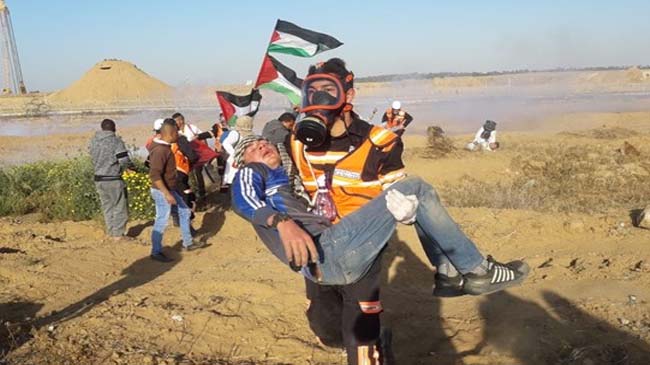 A 15-year-old Palestinian succumbed to wounds that he had sustained during peaceful protests along the eastern borders of the besieged Gaza Strip, on Friday.

The Palestinian Ministry of Health in Gaza confirmed that Israeli forces shot and killed Mousa Ali Abu Shlouf, 15, with a live bullet to his stomach, east of Jabaliya, in the northern Gaza Strip.

The ministry also confirmed that the number of Palestinians injured with Israeli live fire during Friday protests rose to 17.

The ministry mentioned that among others injured was a Palestinian Red Crescent Society (PRCS) volunteer paramedic, who was hit and injured with a tear-gas bomb, resulting in a hand injury.

“The Great March of Return” protests were launched on March 30th by thousands of Palestinian civilians in Gaza — which has suffered from a decade-long Israeli siege — who took to the borders to demand their right of return as refugees to their original homelands, now in present-day Israel.