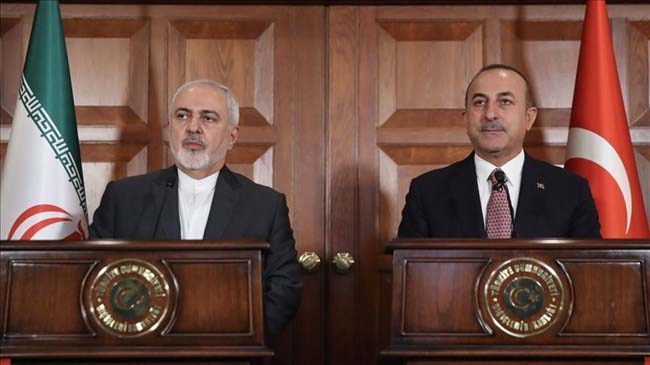 Foreign Minister Mevlut Cavusoglu said on Wednesday Turkey is looking into establishing new trade mechanisms with Iran, like the INSTEX system set up by European countries to avoid sanctions the US reimposed on Iran last year.

Those sanctions followed President Donald Trump’s decision to withdraw unilaterally from a 2015 nuclear accord between Iran and six world powers.

Cavusoglu reiterated Ankara’s opposition to the sanctions and said Turkey and neighboring Iran need to keep working to raise their bilateral trade to a target of $30 billion, almost three times the current level.

“Along with the existing mechanisms, we evaluated how we can establish new mechanisms, like INSTEX…how we can remove the obstacles before us and before trade,” Cavusoglu told a news conference after talks with his Iranian counterpart Mohammad Javad Zarif.

“What is important here is the solidarity and determination between us,” he added.

“Our conscience does not accept that the brotherly Iranian people be punished,” Cavusoglu said of US sanctions on Iran. “Such steps put regional stability, peace, calm and economic development under risk.”

Zarif said Iran will not allow the US to hamper its foreign trade.

“We have no problem trading with others, but we will not allow the United States to question our business with other countries,” Zarif said.

“We believe that the US cannot control the relations of other countries.”

The top diplomat accused the US of pursuing a “hypocritical policy” vis-à-vis Iran, saying Washington maintained its trade with Tehran while the sanctions were in place.

“It may be interesting for many that Iran’s economic relations with some countries decrease last year, but Americans continued their sells to Iran”, Zarif said, adding “this shows the US hypocritical policy.”

France, Germany and Britain have opened a new channel for non-dollar trade with Iran to avert sanctions, dubbed the Instrument in Support of Trade Exchanges (INSTEX).

Washington’s European allies opposed Trump’s move to abandon the 2015 deal, under which sanctions on Iran were lifted in return for Tehran accepting curbs on its nuclear program.

Iran has threatened to pull out of the deal unless the European powers enable it to receive economic benefits. The Europeans have promised to help companies do business with Iran as long as it abides by the deal.

Cavusoglu did not go into details about the new mechanisms but Turkey has a track record of using national currencies in international trade. In October 2017, the Turkish and Iranian central banks formally agreed to trade in their local currencies after using the euro for settlements in the past.

After reimposing sanctions on Iran, Washington granted waivers to eight nations including Turkey that reduced their purchases of Iranian oil, allowing them to keep buying it without incurring sanctions for six more months.

Cavusoglu said the US decision to designate Iran’s Islamic Revolution Guards Corps as a terrorist organization is a dangerous development that could lead to chaos.

Trump and US Secretary of State Mike Pompeo announced the designation against the IRGC last week.

“When we start adding other countries’ armies to terror lists, then serious cracks will occur in the system of international law,” Cavusoglu said. “Trust in the global system will decline and total chaos will ensue.”

The US designation — the first-ever for an entire division of another government — adds another layer of sanctions to the IRGC and makes it a crime under US jurisdiction to provide it with material support.

Zarif met with Turkish President Recep Tayyip Erdogan on Wednesday in Ankara to brief him on his Tuesday’s meeting with Syria’s President Bashar al-Assad.

Turkey and Iran have been expanding contacts amid international efforts to end the conflict in Syria.

Kazakhstan will host a fresh round of Syria talks on April 25-26 in its capital, recently renamed from Astana to Nur-Sultan.

“I had a long interview with Bashar al-Assad. I will be giving details of these discussions to Mr. Erdogan,” Zarif told reporters before the meeting.

At the meeting, both sides expressed opposition to the US sanctions and the blacklisting of the IRGC and emphasized the expansion of bilateral relations and economic cooperation between the two neighbors.

Ankara broke ties with Damascus in 2011 after the start of the Syrian war. But Erdogan acknowledged in February that low-level contacts have been taking place.

Repeated rounds of UN-backed Syria peace talks have failed to end the bloodshed, and Iran, Russia and Turkey have sponsored the parallel Astana negotiations since early 2017.

Talks among the three countries have focused on the terrorist-held bastion of Idlib in northwestern Syria, local Syrian media reported.