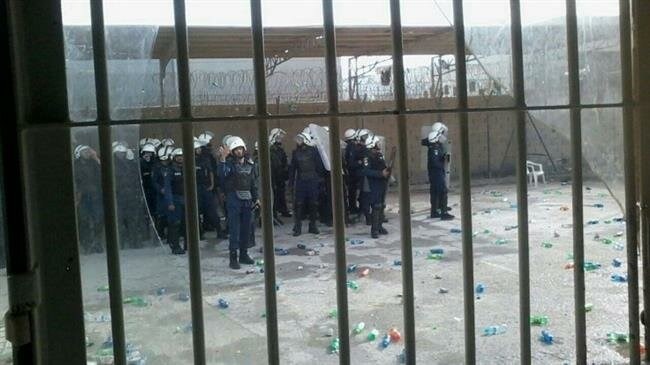 Twelve prison guards in Bahrain have been charged with physically assaulting inmates, as the ruling Al Khalifah regime presses ahead with its heavy clampdown on political dissidents and pro-democracy activists in the tiny Persian Gulf kingdom.

The Special Investigation Unit (SIU) announced on Wednesday that it had received complaints on April 11, concerning “assault” in Jaw Prison, which lies south of the capital Manama.

The notorious Jaw Prison is the largest prisoner facility in Bahrain and is used to hold peaceful protesters, who participated in anti-regime demonstrations, Presstv Reported.

“Twelve security (personnel), including two officers, were charged (with assault) and transferred to court,” the SIU said after investigating the complaints.

It added that the court will hold its first hearing of the abusive prison guards on May 20.

The SIU, which is a public prosecution commission tasked with investigating government officials and employees, further noted that a security guard was sentenced to six months in jail earlier this year after being charged with assault.

It said it had received 29 complaints of “torture, mistreatment, and use of excessive force” in the first four months of this year, adding that 67 security personnel were questioned.

Thousands of anti-regime protesters have held demonstrations in Bahrain on an almost daily basis ever since a popular uprising began in the country in mid-February 2011.

They are demanding that the Al Khalifah regime relinquish power and allow a just system representing all Bahrainis to be established.

Manama has gone to great lengths to clamp down on any sign of dissent. On March 14, 2011, troops from Saudi Arabia and the United Arab Emirates were deployed to assist Bahrain in its crackdown.

Scores of people have lost their lives and hundreds of others sustained injuries or got arrested as a result of the Al Khalifah regime’s crackdown.

On March 5, 2017, Bahrain’s parliament approved the trial of civilians at military tribunals in a measure blasted by human rights campaigners as being tantamount to imposition of an undeclared martial law countrywide.