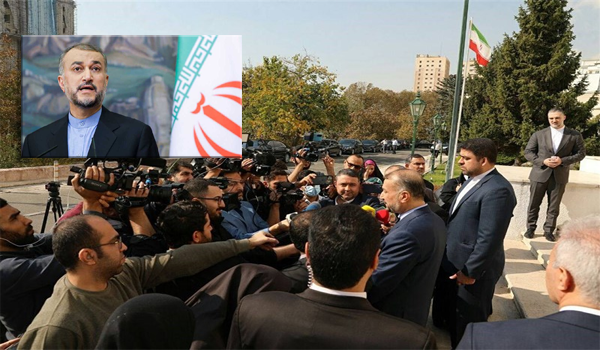 Speaking to reporters on Saturday, Amirabdollahian once again rejected claims that Iran has provided Russia with missiles and drones to be used in the Ukraine war.

“Our relations with Russia are based on neighborhood and mutual interests. I would like to emphasize here that the fuss made by some western countries that Iran has provided Russia with missiles and drones to help it in the Ukraine war, claims about the missile part is completely wrong and the drone part is correct,” he said.

But he hastened to add that Iran has provided Russia with a limited number of drones months before the war in Ukraine, Press TV reported.

“We agreed with Ukraine’s foreign minister that if they have any documents proving Russia has been using Iranian drones in Ukraine, Kiev should provide these documents to us,” he explained.

The Iranian foreign minister also revealed that Iranian and Ukrainian officials were supposed to meet two weeks ago, as an Iranian defense and political delegation went to a European country to meet the Ukraine delegation.

He said that unfortunately, Kiev made a last-minute decision not to attend the meeting.

“The reason was that the US and some European countries, especially Germany, told Ukraine that while we (West) want to use the drones issue against Iran, you want to drink coffee together in a European country!” he added.

Tehran has multiple times rejected in the strongest terms the Western claims of Iran’s delivery of weapons and drones to Russia to be used against Ukraine, saying the country has had defense cooperation with Moscow for long and pursues a resolution of the conflict through dialogue and diplomacy.