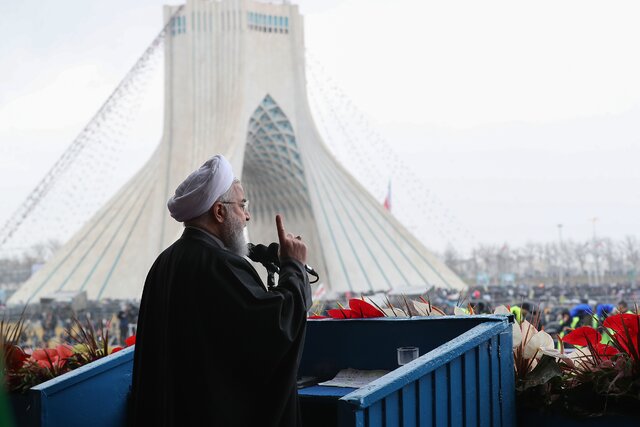 Stressing that the path of the Islamic Revolution will continue as strong as the past 40 years, Iranian President Hassan Rouhani said, “People’s strong presence in streets around the country, including Tehran means that the plots of the enemies in the past one year have been foiled”.

Addressing the immense gathering of people during Feb. 11 demonstrations celebrating the 40th anniversary of the victory of the Islamic Revolution on Monday, Hassan Rouhani said, “The enemies will never achieve their vicious goals”.

Stating that the Iranian nation freed itself from dictatorship, colonialism, and dependencies, the President said, “The Iranian nation was successful in establishing the Islamic Revolution in this land”.

“This year, we are holding Feb. 11 celebrations when the United States, the Zionists and the reactionaries in the region have put our people under the pressure of sanctions,” he continued.

Rouhani added, “People know it well that 205 years ago, a great part of Iran’s northern parts and Caucasus separated from Iran during the disloyal Qajar kings”.

“Even 47 years ago, seven years before the victory of the Islamic Revolution during the time of the disloyal Pahlavi regime, an important part of southern Iran that was called Iran’s 14th province in geography books, separated from the country”.

He continued, “But 38 years ago when the world powers incited Saddam to attack Iran with the help of the weapons made by the west and the east, the money of reactionaries in the region and soldiers of many other countries, brave Iranians resisted against the entire world with its brave children, Army, IRGC, Basij, Police and all people”.