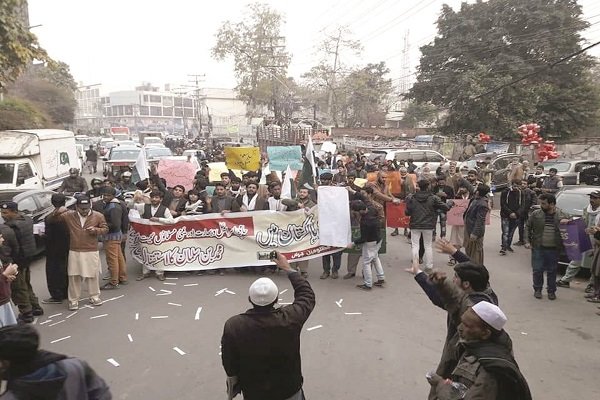 Pakistani people from all walks of life continued their protests against a planned visit to the country by Saudi Crown Prince Mohammad bin Salman, also known as MBS, whose trip has been delayed.

According to Tasnim dispatches, dozens of Pakistanis attended the protest rallies in various cities on Saturday, calling on the Islamabad government to cancel bin Salman’s visit.

The demonstrators carried various placards, one of which read, “We are opposed to the trip of the killer of Yemeni people and Jamal Khashoggi to our country and do not welcome him.”

Protests have continued for several days and some influential religious groups in Pakistan have also called for the unity of all political and religious groups to prevent bin Salman’s visit.

The Saudi crown prince was originally scheduled to go to Pakistan on Saturday along with a delegation of businessmen. But Pakistani officials confirmed Saturday that an upcoming conference of Pakistani and Saudi business leaders was postponed “due to unavoidable circumstances.”

MBS will arrive in Islamabad on Sunday for a two-day visit that will see him hold talks with Pakistani Prime Minister Imran Khan, Army Chief Qamar Javed Bajwa and President Arif Alvi, Pakistan’s foreign office said in a statement this week.

Saudi Arabia has also faced a degree of diplomatic isolation after the killing of journalist Jamal Khashoggi in its consulate in Istanbul last year.