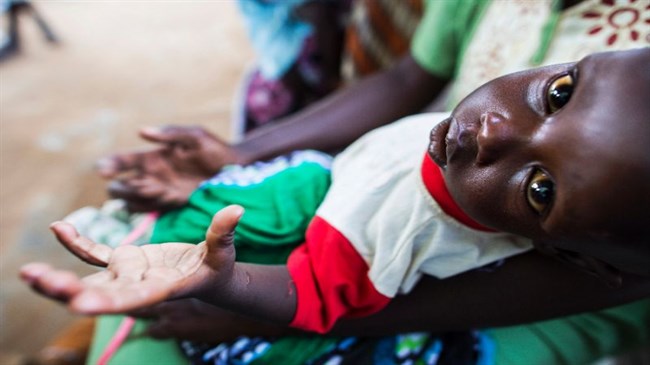 Five months into South Sudan’s fragile peace, 1.5 million people are on the brink of starvation and half the population, more than six million people, are facing extreme hunger, say the United Nations and South Sudan’s government in a report issued Friday.

Without aid more than 7.5 million people will be at risk of extreme hunger, 260,000 of whom could slip into catastrophe, at risk of starvation, by May, a 70 percent increase compared to the same time last year, said the report, AP wrote.

Aid agencies are concerned that months after the end of South Sudan’s five-year civil war, which killed almost 400,000 people and displaced millions, that populations are still starving.

“There has been no countrywide improvement since last year, this is the start of a concerning trend with the same number of people struggling to access basic food requirements,” Katie Rickard country representative for REACH, a humanitarian research initiative that contributed data for the analysis told The Associated Press.

It’s been two years since South Sudan declared famine in two counties in Unity state, the first formally declared famine anywhere in the world since Somalia’s crisis in 2011. While famine hasn’t returned the numbers are grim. 18 counties are currently classified as being in emergency with 45,000 people in Jonglei, Lakes and Unity states in catastrophe, said the report.

“Without food aid there would be a full blown famine,” said one aid worker with close knowledge of the report who wasn’t authorized to speak on the record.

The critical conditions are being attributed to displacement driven by conflict, low crop production, an enduring economic crisis and restricted humanitarian access.

Despite a 2017 decree by President Salva Kiir for unhindered access, aid workers still struggle to reach the most vulnerable people. In January the number of bureaucratic impediments such as delays and blockages at checkpoints almost tripled from 2018, according to the UN. In December supplies were stopped at the border and trucks traveling between Juba and Bentiu were each charged approximately $4,500 to pass through almost 60 checkpoints.

“It is unacceptable that over half of the population faces severe acute food insecurity whilst humanitarian workers continue to be killed and detained,” said Sarah Jackson, Amnesty International’s deputy director of research. The government should stop this man-made humanitarian crisis, she said.

Breaking the cycle of hunger is partly contingent on the implementation of the peace deal and the ceasefire’s ability to hold, said Friday’s report. But even then it’ll take more than a year to pull the country out of crisis especially as people start to return home, Pierre Vauthier a representative for the UN’s Food and Agriculture Organization said.

“The population needs humanitarian assistance … very quickly we will need to help them reintegrate,” he said. 2019 will be a defining year and the focus needs to be on increasing food production, he said.

In parts of the country that have been cut off for years due to fighting and where communities have fled so there’s been little cultivation, the government is concerned people will have nothing to eat when they decide to come home.

With only three months left in the pre-transitional phase of the peace deal, the international community’s patience is waning as the agreement’s been met with delays and continued fighting.

As South Sudan grapples to pick up the pieces after years of war, civilians across the country continue bearing the brunt.