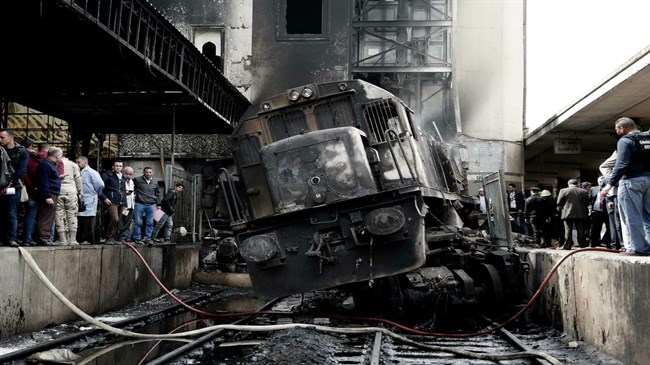 At least 25 people were killed and 40 others injured Wednesday morning in a fire at Egypt’s busiest railway station, the country’s Health Ministry said, according to state media.
The Ramses station in central Cairo was set ablaze after a train collided with the platform and its fuel tank exploded, state-run news site Al-Ahram reported, citing security sources.

Egypt’s Health Minister Hala Zayed told reporters in a televised press conference that many of the injured are in a critical condition, with second- and third-degree burns. Thirty ambulances were on site, but people in the area volunteered to take some of the injured to the hospital in their own cars.

Egypt’s Prosecutor General Nabil Sadek ordered an investigation, according to Al-Ahram. President Abdel Fattah el-Sisi has also vowed to bring those responsible for the accident to justice.

“People were screaming, and there were calls on the station’s microphone for people to evacuate,” eyewitness Ahmed Ibrahim told CNN. “They told us not to approach the dead. Their bodies were in a pile on the other side.”

“I saw this (injured) girl and I felt she is like my daughter. I carried her out in a blanket,” Ibrahim said.

Another eyewitness, Sami Rafaat, told CNN: “I saw the train speeding as if it were not entering the station but was in a race. Then there were bodies on the platform and on the tracks. They were completely burnt.”

Two eyewitnesses said they saw the driver jump out of the train as it approached the station.

Images posted on social media showed charred bodies at the busy station in the heart of the capital. Other online photos revealed a blackened platform and smoke billowing from the station.

CCTV footage broadcast on local media showed people, some on fire, running away from the platform.

More than an hour after the collision, body parts were still scattered around a restroom near the site of the collision, and marks left by charred bodies stained the platform.