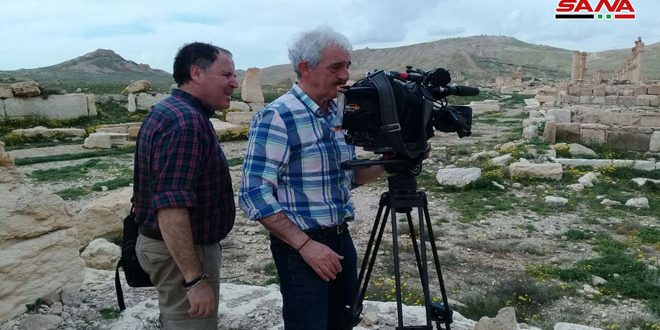 Many foreign media delegations are still flocking to the historical Syrian city of Palmyra to prepare films and documentaries on the crimes perpetrated by Daesh (ISIS) terrorist organization against civilians and the history of the archeological city.

A team from the Spanish TV are shooting a documentary on the crimes committed by Daesh in Palmyra and a number of the Syrian provinces.

Spanish Journalist Achila Ruidoso said in a statement that she is working on preparing a documentary , in addition to a reportage for the weekly reportage program broadcast by the Spanish TV on Palmyra City and its historical importance as a humanitarian legacy of the international culture.

Ruidoso added that Palmyra city which in the past stood as a fortress in the face of the Roman invaders will remain an icon of the war between barbarism and civilization.

She affirmed that the goal behind documenting Daesh crimes in Palmyra is to convey a clear image to the public opinion on the reality of what is taking place in Syria and the global attack waged against the country.