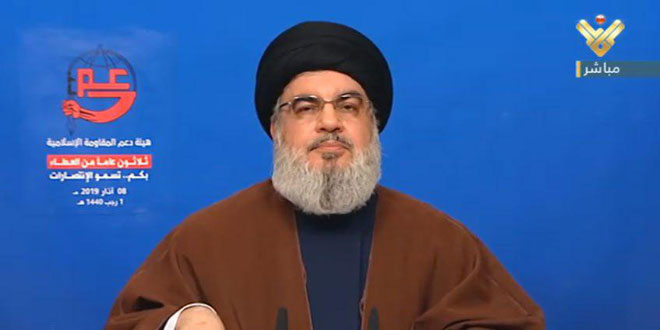 Hezbollah Secretary-General Sayyed Hassan Nasrallah stressed that the steadfastness of Syria, Iran and the resistance in Lebanon and Palestine dropped the U.S. project to control our region, pointing out that what they failed to achieve in Syria by military war, are trying to take it under siege and economic pressure on the Syrian people.

In a speech he delivered Friday on the 30th anniversary of establishing the Resistance Support Association, Nasrallah stressed that since the beginning of the 80s and so far the defeats have hit the American and Israeli project in the region thanks to the resistance movements backed by Syria and Iran.

He confirmed that the axis of resistance has confronted Trump’s “deal of the century” scheme in the region and that sanctions and terrorism lists are a war on the resistance that should be faced.