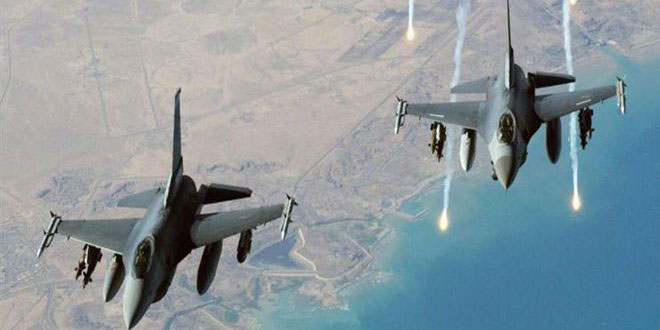 Since its inception outside the International Security Council, the crimes and massacres committed by the US-led Coalition and the huge destruction it has caused to the infrastructure and the facilities across al-Jazeera region in Syria, in addition to displacing tens of thousands of citizens have proven the falseness of the US which claims fighting terrorist groups.

It has become clear that the goal behind establishing that “coalition” is to spill the blood of the Syrians and to prolong the war against their country, in addition to destroying the infrastructure and hindering any political solution to the crisis in the country.

In a stark image of those crimes committed by Washington, today Raqqa City on the bank of the Euphrates River, which has been destroyed by warplanes of the “International Coalition”, narrates chapters of its locals’ suffering in light of an alleged Takfiri caliphate which Daesh (ISIS) terrorist organization wanted to establish.

While on the other bank of the river, there are many witnesses on the obnoxiousness of the white phosphor used by warplanes of the US-led which have obliterated all signs of life there.

Washington, which hasn’t ever cared about the history of a nation or the deep-rootedness of a human civilization or about the life of civilians in the countries in which it adopts a warmongering policy, has practiced direct criminality against the Syrians throughout the hostile war waged against Syria.

Warplanes of the alleged coalition wanted to obliterate the history of Raqqa city which is a witness on the deep-rooted history in al-Rafidain region through shelling the city with white phosphorous bombs destroying most houses and infrastructure.

That illegitimate coalition and the crimes it perpetrates reflect the full collapse of the values and ethics which the UN has pledged to respect since its establishment due to the complete recklessness showed by the US and its allies towards these values and ethics and they show the rate of their disregard for the lives of civilians and the provisions of the international law.

Over the past two years, warplanes of the US-led Coalition has shelled with white phosphorous bombs and internationally-banned weapons Hajin town and many villages and towns in Deir Ezzor southeastern countryside and al-Sour village in the northeastern countryside and the western outskirts of Raqqa city, in addition to the area separating the neighborhoods of al-Mshalab and al-Sinaa and the neighborhood of al-Sibahi as well as the building of the national hospital in Raqqa city.

The latest crime committed by the US-led coalition is shelling the area of al-Baghouz farms on the Syrian-Iraqi borders to the east of al-Bokmal City few days ago.

In framework of implementing Washington’s claims on combating terrorism, it has become very clear to everyone that cooperation and coordination between the “coalition” and the terrorist organizations of Daesh (ISIS) and Jabhat al-Nusra which are on the international list of terrorism and others which have represented in evacuating Daesh leaders from their bastions to the areas where the US forces are deployed.

Meanwhile, websites affiliated to US-backed militias talk about releasing scores of Daesh members after turning themselves in a farcical play whose end has become so close thanks to the determination of the Syrian Arab Army personnel who are the real fighters against all types and forms of terrorism across Syria.

Since its inception on August in 2014, warplanes of the “International Coalition” have repeatedly shelled residential neighborhoods in Deir Ezzor, Raqqa and Hasaka and their countryside claiming the lives of hundreds of civilians and injuring others, in addition to causing material damage to their houses and properties and a huge damage to the infrastructure and the vital facilities.

Foreign and Expatriates Ministry has many times called for dissolving the illegitimate International Coalition which had been established outside the framework of the UN and without the approval of the Syrian Arab Republic and the Ministry has also called for prosecuting those who perpetrated crimes against the Syrians.