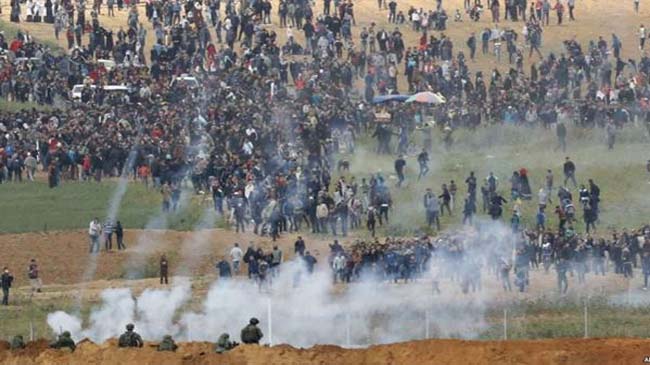 The United Nations Human Rights Council (UNHRC) in a resolution condemned Israel’s intentional use of illegal and violent ways to stand against non-military protestors in Gaza Strip.

to UNHRC website, “on 18 May 2018, the Human Rights Council adopted a resolution (S-28/1) in which it decided to urgently dispatch an independent, international commission of inquiry to investigate all alleged violations and abuses of international humanitarian law and international human rights law in the Occupied Palestinian Territory (OPT).”

The resolution which was initiated by Pakistan on behalf of the OIC is aimed to establish the facts and circumstances, with assistance from relevant experts and special procedure mandate holders, of the alleged violations and abuses, including those that may amount to war crimes.

The great ‘March of Return’ rallies culminated on May 15 to mark what Palestinians refer to as the Nakba, or Catastrophe, a reference to the forced removal of 750,000 Palestinians from their homes and villages to clear the way for Israel’s establishment in 1948.

The mass Friday demonstrations have continued since then.

Since the protests began on March 30, Israeli forces have martyred at least 260 Palestinians in the besieged coastal enclave and wounded about 27,000 people, according to health officials in Gaza.

The Organization of Islamic Cooperation (OIC) has passed an enactment to provide sustainable budget for the United Nations Relief and Works Agency for Palestine Refugees in the Near East (UNRWA).