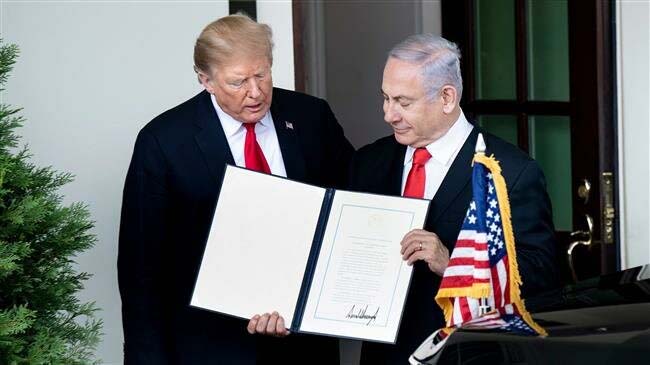 As US President Donald Trump signed a proclamation formally recognizing “Israel’s sovereignty” over the occupied Golan Heights, many countries around the world, including Iran, Syria, Turkey, and Russia condemned his decision.

The Golan Heights was seized by ‘Israel’ from Syria during the Six-Day War in 1967. In 2018, the UN General Assembly adopted a resolution urging Israel to immediately withdraw its forces from the area after the country organized local elections in the area on 30 October.

Spokesman for the Chinese Foreign Ministry Geng Shuang said Tuesday his country stands against any attempts to change facts and fuel tensions over the Golan Heights.

Kremlin Spokesman Dmitry Peskov said, “The decision clearly has negative consequences both for the Middle East settlement and for the general atmosphere of Syria’s political settlement. And most importantly, this is probably another step taken by Washington in an unequivocal violation of international law. We very much regret it.”

Trump’s decision will be discussed at talks between Russian President Vladimir Putin and his Lebanese counterpart Michel Aoun later on Tuesday, Peskov added.

The Turkish Foreign Ministry said in a Monday statement, “We deplore and strongly condemn the decision of the US Administration to recognize Israel’s sovereignty over the Golan Heights, held under Israeli occupation since 1967. This unfortunate decision, which constitutes a grave violation of international law, particularly the United Nations Security Council Resolution 497 (1981), demonstrates that the US Administration continues its approach to be part of the problem, rather than part of the solution in the Middle East.”

“This US statement does not change anything in the status of the Golan Heights. The Golan is a piece of occupied Syrian territory … Occupation is a serious crime, but attempts to legalize this occupation is also a great mistake,” Aboul Gheit said in a statement.