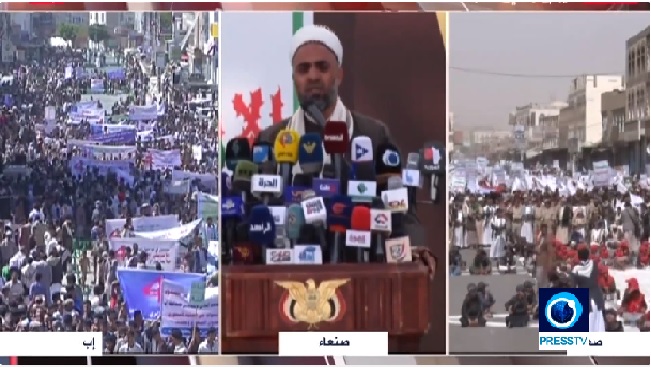 Millions of Yemenis have taken to the streets of the capital, Sana’a, and other major cities to mark the fourth anniversary of the Saudi regime’s devastating war against the Arab country and reiterate their steadfastness in the face of the ongoing aggression.

However, the protests reached their peak on Tuesday, March 26, the anniversary of the day the Saudi regime and a coalition of its vassal states launched the US-backed military campaign against Yemen in 2015 to reinstate the ex-Yemeni government – a close Riyadh ally – and destroy the popular Houthi Ansarullah movement.

The demonstrators carried placards and Yemeni national flags, chanting slogans against Saudi Arabia, Israel and the US, which has been providing military support to the Saudi-led coalition in the course of the war.

The offensive initially consisted of a bombing campaign, but was later coupled with a naval blockade and the deployment of ground forces into Yemen.

Yemen’s Grand Mufti was among the keynote speakers at the rally in Sana’a, where he called on the Arab country’s religious scholars as well as the Muslim world not to remain silent in the face of the crimes the Al Saud regime and its allies have been committing against Yemenis.

Mohammed Ali al-Houthi, the chairman of the Supreme Revolutionary Committee of Yemen, also delivered a speech during which he said, “The Yemeni nation will continue fighting to the end and [we] will never give in. We will finally defeat the enemy.”

He further condemned US President Donald Trump’s decision on Monday to formally recognize Syria’s occupied Golan Heights as part of the “Israeli territory.”

Delivering a televised speech broadcast live on Monday evening, Leader of Yemen’s Houthi Ansarullah movement Abdul-Malik al-Houthi said the Saudi regime has failed to achieve its objectives despite enjoying support from Washington and its other allies.