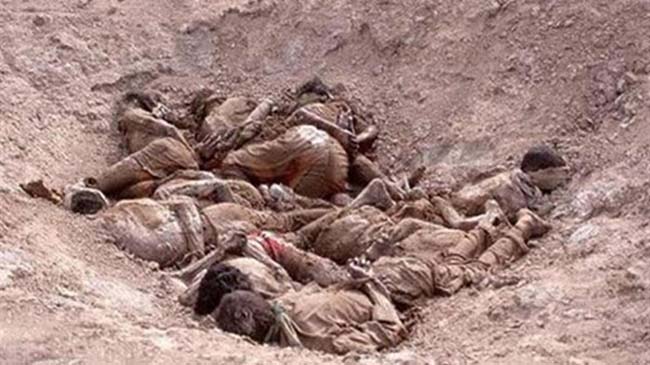 The bodies of over 300 victims of the ISIL and the US air raids, including those of slain women and children, were discovered in mass-graves and from under the rubles of destroyed buildings in Raqqa.

The Kurdish-language Hawar News quoted Head of Raqqa’s Rescue Team Yasser al-Khamis as saying on Thursday that the corpses of 304 people have been unearthed from a mass-grave in Fakhikheh region in Southern Raqqa since early January.

He added that most of the bodies belong to the civilians, including women and children, noting that some of the victims had been executed.

Meantime, media activists reported that bodies of several civilians, most of them women and children, were pulled out of the debris in al-Adkhar and al-Ta’aminat districts of Raqqa in the past few days.

They said the corpses belong to the people killed by the ISIL terrorists or in the US coalition airstrikes on Raqqa.

Also, earlier this month, the Syrian army discovered around 30 dead bodies from the debris of the buildings destroyed in the US-led air raids on Raqqa city and mass graves of ISIL’s victims.

“The dead bodies of at least 21 civilians, including children and women, massacred by the ISIL were retrieved from Fakhikheh mass grave South of Raqqa City,” media activists said.

They also said that the Syrian Army troops discovered the corpses of seven Syrian citizens, including children, who had been killed in the US airstrikes on Raqqa from the districts of al-Adkhar and al-Haramiyeh of the city.