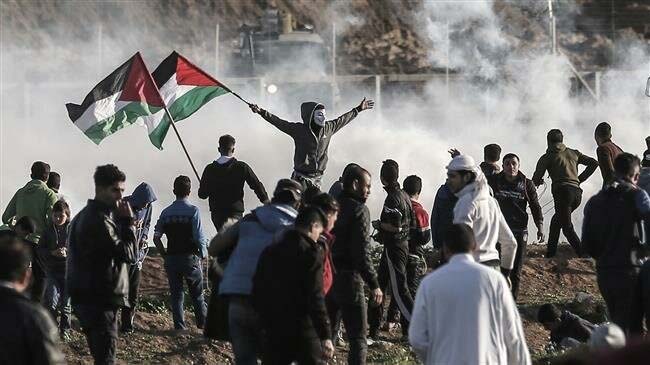 On the eve of the first anniversary of the “Great March of Return” protests, Israeli soldiers and tanks have been deployed near the fence separating the occupied territories from the besieged Gaza Strip.

The reinforcements were deployed on Friday morning as Gazans planned to stage a massive protest on Saturday to commemorate the first anniversary of the demonstrations, in the course of which Israeli soldiers have killed over 260 Palestinians, Press TV reported.

Israeli Prime Minister Benjamin Netanyahu threatened on Thursday that Tel Aviv would wage a broad military campaign on Gaza if needed, after a two-day flare-up of cross-border fighting that has left several people injured on both sides.

The “Great March of Return” protests demand the right to return for those driven out of their homeland by Israeli aggression. They started on March 30 last year. Tensions have since been running high on the edge of Gaza. At least 26,000 Palestinians have also been wounded in the protests, according to the Gaza Health Ministry.

A United Nations (UN) fact-finding mission found that Israeli forces committed rights violations during their crackdown against the Palestinian protesters in Gaza that may amount to war crimes.

Egypt, the UN, and others have been trying to broker a deal to limit the level of violence.

Meanwhile, the Palestinian resistance movement of Hamas has reportedly backed an Egyptian proposal to foster calm along the border ahead of the planned protests, two Hamas officials said Friday.

The officials said that a delegation of Egyptian officials had held talks with Hamas and other factions in Gaza in meetings that continued until the early hours of Friday. One Hamas official who attended the meetings said the resistance movement had supported an Egyptian proposal that would see demonstrators stay several hundred meters from the fence.

In return, he said, “the Egyptians informed us that the (Israelis) promised to ease their [restrictive] measures.” Israel has reportedly vowed not to fire on the protesters unless they approached the fence and to allow Qatar to increase the amount of its aid to Gaza, among other measures. A second Hamas official confirmed the report.

Gaza has been under Israeli siege since June 2007, which has caused a decline in living standards. Israel has launched three major wars against the enclave since 2008, killing thousands of Gazans each time and shattering the impoverished territory’s already poor infrastructure.