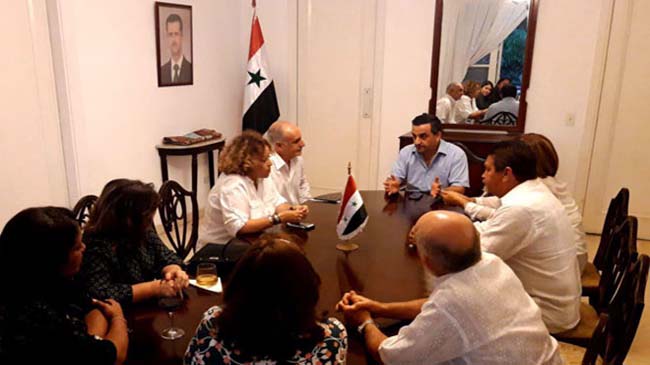 A number of Journalists from Cuban media outlets affirmed their confidence in Syria’s victory over terrorism, lauding the steadfastness of the country’s leadership and people during the war imposed on it .

Meeting with Syria’s Ambassador to Cuba Dr. Idris Mayya on Thursday,the Cuban journalists indicated that global imperialism is trying to repeat the same scenario, which has been followed in Syria, on Venezuela and Cuba by using the same methods and procedures, especially the imposition of unilateral sanctions on all progressive governments that do not follow the American path.

For his part, Mayya underlined the Syrian Arab Army’s determination to liberate every inch of the Syrian territory from terrorism, pointing out to the failure of all the US schemes and its allies against Syria thanks to steadfastness of people, sacrifices of the army , and the leadership’s wisdom.