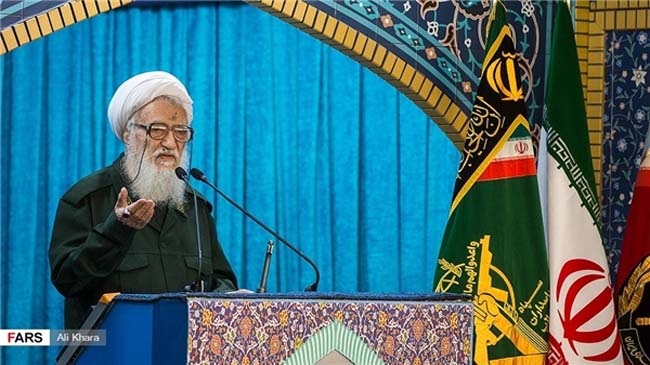 Tehran’s provisional Friday Prayers Leader Ayatollah Mohammad Ali Movahedi Kermani blasted the US for designating the Islamic Revolution Guards Corps (IRGC) as a terrorist organization, and said that the US government itself is sponsor of terrorism in the world.

Addressing a large and fervent congregation of the people in Tehran on Friday, Ayatollah Movahedi Kermani said, “The US is a mother of terrorism.”

He reiterated that the action to designate a part of a country’s armed forces as a terrorist organization is against all the international laws and regulations, and described US President Donald Trump as a “fool” who does not know what he is doing.

Ayatllah Movahedi Kermani underlined that many countries in the world have called into question America’s move as they think it can complicate the situation in the Middle East, and said, “Even some US analysts have also described the US’ move as a dangerous act that would endanger American soldiers’ lives.”

He reiterated that the Americans themselves know that this was a very stupid action.

“The whole world, especially the nations in the region now know that the US is the mother of terrorism, as America itself and Trump have acknowledged that it was the US which created Taliban and they themselves admit that they are the founder of terrorism,” he said.

The senior cleric further said that the whole Iranian nation and political groups, regardless of their political affections, support the IRGC against the US move, warning the US president “not to twist the lion tail as the IRGC can reduce Tel Aviv to rubble by its missiles if the Leader allows them to do so”.

His remarks came days after the United States designated the IRGC as a “foreign terrorist organization”, marking the first time Washington has formally labelled another country’s military a “terrorist group”.

Responding to Washington’s Monday move, Iran immediately declared the US as “state sponsor of terrorism” and American forces in the region “terrorist groups”.

Iran’s top security body, the Supreme National Security Council (SNSC), in a statement issued on Monday evening declared the United States a “terrorist government”, and blacklisted the “CENTCOM and all its affiliates a terrorist group”.

The SNSC – that is headed by President Hassan Rouhani – condemned Washington’s move, calling it “an illegal and dangerous action” that poses a “major threat to regional and international peace and security and grossly violates the rules of international law”.

The statement further condemned the US decision as “unlawful and unreasonable action” prompted by the Islamic Republic’s regional influence and success in fighting against terrorists, and blamed CENTCOM for harming Iran’s national security as well as ruining the lives of “innocent Iranian and non-Iranian individuals” to promote the US “aggressive policies” in West Asia (the Middle-East).

“The Islamic Republic of Iran regards this baseless move as a major threat to regional and international peace and security and a blatant violation of the compelling rules of international law and the United Nations Charter,” Iran’s top security body reiterated.

Due to the “clear support” US forces in Western Asia lend to terrorist groups, and their own “involvement in terrorist activities”, the US military in the region should be put on a list of terrorist groups in the Islamic Republic of Iran, Zarif said in a letter to Rouhani and Iran’s Supreme National Security Council.

Also in a tweet on Monday, the Iranian top diplomat slammed the decision by the US administration on labeling the IRGC a “foreign terrorist organization”, seeing Trump’s close ties with Netanyahu as a main contributor to the gravely wrong move made by the US president ahead of the Tuesday election in Israel.

“A(nother) misguided election-eve gift to Netanyahu. A(nother) dangerous US misadventure in the region,” Zarif wrote on Twitter on Monday, referring to the IRGC designation as yet another move by the US president in aid of the Israeli Prime Minister Benjamin Netanyahu after Trump’s recent decision to recognize Israel’s annexation of the Syrian Golan Height.

The US’ Golan Heights decision, which is in obvious contravention of international law, has been met with condemnation by the international community, with the UN and even Washington’s Persian Gulf and European allies blasting the move.

Netanyahu welcomed the US decision to label Iran’s IRGC a “terrorist organization”, rushing to thank his “dear friend” Trump for answering “another important request that serves the interests of our country and the region”.

“We will continue to act together in any way against the Iranian regime that threatens the state of Israel, the United States and the peace of the world,” the Israeli PM wrote on Twitter.

With Israel’s election to take place on Tuesday, the Israeli primer is likely grateful for the latest public show of Trump support for his government. The right-wing Likud party, led by Netanyahu, and Blue and White political alliance, led by former Israeli Defense Forces chief Benny Gantz, who threatens to end Netanyahu’s decade-long tenure, are considered the main rivals in the polls to elect members of Knesset (Israel’s parliament).

The Israeli regime’s traditionally close relationship with the US has grown stronger under Trump. Washington recognized Jerusalem al-Quds as the Israeli “capital” in December 2017 and moved the American embassy from Tel Aviv to the ancient city in May 2018, sparking global condemnations.

Responding to the US hostility towards the IRGC, General Staff of the Iranian Armed Forces declared in a statement on Tuesday that the forces under its command would fight against the US Central Command known as CENTCOM “terrorist group”.

“The US administration’s move to designate the IRGC as a terrorist group is actually a desperate attempt and retaliation to cap the US failures in the region and of course, it lacks operational value and validity and is practically doomed to failure,” the statement said.

The statement referred to the SNSC’s reaction to Washington’s decision and designation of the CENTCOM as a terrorist group, and said the General Staff of the Iranian Armed Forces would consider the US Army forces under the CENTCOM command as terrorists and “will not spare any efforts to support the IRGC’s anti-terrorism measures in the fight against the CENTCOM terrorist group”.