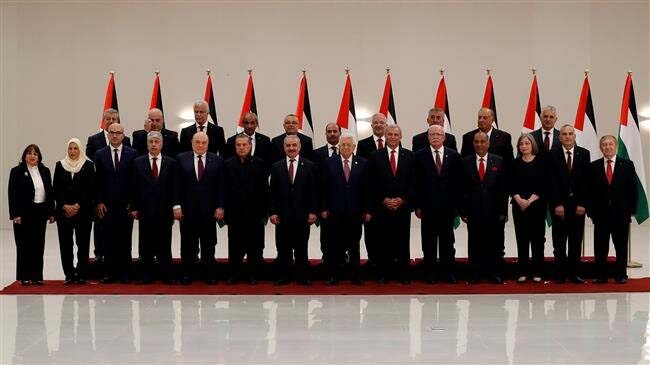 The Hamas resistance movement has criticized the formation of the new Palestinian government dominated by the Fatah party, saying such a government will ease the way for the imposition of the United States’ yet-to-be-unveiled proposal on the Israeli-Palestinian conflict.

On Saturday, Palestinian President Mahmoud Abbas swore in the new government headed by a loyalist from his Fatah party, Mohammad Shtayyeh.

The 21-member cabinet only includes ministers from factions affiliated with the Palestine Liberation Organization (PLO), primarily Fatah, but excludes Hamas and the Islamic Jihad movement.

In a statement issued on Saturday shortly after the government was sworn in, Hamas, which runs Gaza, warned that the new West Bank-based administration would further divide Palestinians.

The Shtayyeh-led government, the statement read, “resorts to unilateralism and monopoly of power. This move widens the Palestinian division at the expense of the Palestinian people’s interests.”

“The Fatah-formed separatist government lacks legal and constitutional legitimacy and it separates the Gaza Strip from the West Bank, which is a move in line with the ‘deal of the century,'” it added.

The so-called deal of the century, drawn up by the administration of US President Donald Trump to address the conflict, is said to be hugely in favor of the Israeli regime.

Hamas underlined the need to form an inclusive national unity government, which serves all Palestinian people and puts an end to the oppression they have been enduring.

The new government should invite Palestinian leaders to agree upon a national strategy to fight off all challenges facing the Palestine issue, the resistance group noted.

Shtayyeh is seen as a critic of Hamas and a proponent of Israeli-Palestinian talks as well as the so-called two-state solution.

UN Special Coordinator for the Middle East Peace Process Nickolay Maldenov has welcomed the formation of the new Palestinian government, saying he was looking forward to cooperating with the team.

“At a time of significant financial and political challenges to the Palestinian national project, all must support the government’s efforts and work to overcome internal divisions. Unity is essential to advancing the goal of a lasting peace,” he said in a statement.

He further expressed the UN’s commitment “to working with the Palestinian leadership and people in ending the occupation and advancing their legitimate national aspirations for statehood based on UN resolutions.”