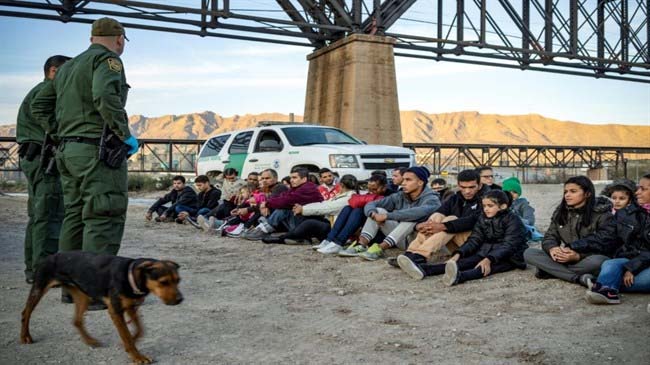 About 30 Brazilian migrants, who had just crossed the border, sit on the ground near US Border Patrol agents in Sunland Park, New Mexico.

Trump’s announcement on Twitter reversed a previous White House assurance that the idea – criticized as political retribution against cities led by opposition Democrats – had been dropped, AFP reported.

“Due to the fact that Democrats are unwilling to change our very dangerous immigration laws, we are indeed, as reported, giving strong considerations to placing Illegal Immigrants in Sanctuary Cities,” Trump said on Friday.

“The Radical Left always seems to have an Open Borders, Open Arms policy – so this should make them very happy!” he tweeted.

The Washington Post revealed the proposal, which would mark a new flashpoint in the ever growing political divide over immigration.

Trump has staked his presidency on his insistence that the US is being overrun by migrants and asylum seekers.

But opponents, mostly in the Democratic Party, say his push for building more walls on the Mexican border and his almost daily denunciations of migrants as dangerous criminals incite racial hatred.

In comments to reporters later, Trump said that he wanted Congress, where the House of Representatives is controlled by Democrats, to tighten visas and streamline the deportation process.

Otherwise, he warned, he’ll order migrants to be dumped on the sanctuary cities.

“If they don’t agree we might as well do what they say they want…. We’ll bring them to sanctuary city areas and let that particular area take care of it,” he said. “We can give them an unlimited supply.”

And late Friday, he reiterated his call for a “merit” based immigration system.

“If the Radical Left Democrats all of a sudden don’t want the Illegal Migrants in their Sanctuary Cities (no more open arms), why should others be expected to take them into their communities?” he tweeted.

Sanctuary cities are places where local authorities – usually Democratic-run – have refused to hand over undocumented immigrants for deportation.

“This is just another in a long line of scare tactics and half-baked ideas that are just about chasing headlines and distracting people from real issues,” she tweeted.

Citing homeland security officials and leaked emails, the Post said White House officials first broached the plan in November, asking several agencies whether members of a caravan of migrants could be arrested at the border and then bussed “to small- and mid-sized sanctuary cities”.

The White House told the Immigration and Customs Enforcement agency (ICE) that the plan was intended to alleviate a shortage of detention space, but would also send a message to Democrats, the Post said.

After the White House pressed the issue again earlier this year, ICE rebuffed it as “inappropriate.”

The Post said a White House official and a spokesman for the Department of Homeland Security said the proposal was no longer under consideration.

One of the centers targeted was the California constituency of House Speaker Nancy Pelosi, whose office on Thursday blasted the plan.

Trump’s all-out fight with the Democrats over immigration comes as border agents report being overwhelmed by the number of migrants and people demanding asylum after fleeing violent Central American countries.

The number of immigrant detainees in ICE custody has approached 50,000 in recent months, the Post said, an all-time high that has strained the agency’s budget.

Another of Trump’s controversial proposals to resolve the situation has been to shut the border with Mexico temporarily. He backed off the idea after outcry over the likely damaging economic effects.