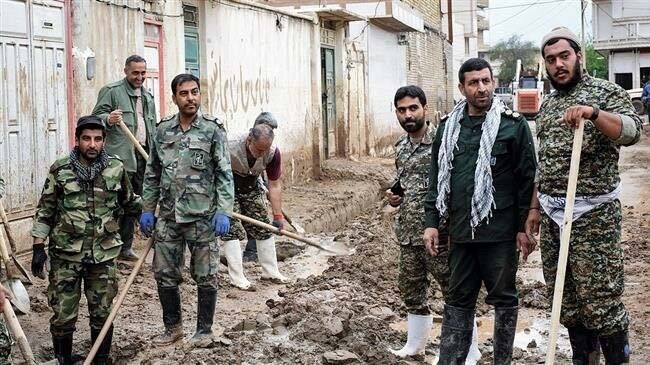 Saudi Arabia and the UAE have offered to help flood victims in Iran days after welcoming US blacklisting of the Islamic Revolution Guards Corps (IRGC), which plays a central role in relief efforts.

In a statement Friday, the Saudi Red Crescent Authority and the Red Crescent Society of the UAE said that they were drawing up a joint plan to “alleviate the suffering of people affected by the devastating flash floods that recently hit Iran.”

The operation, they, added was being undertaken within the framework of “Islamic brotherhood and in solidarity” with the Iranian nation, Presstv Reported.

The agencies noted that they were discussing appropriate procedures in order to implement their initiative. There was no reaction from Iranian authorities to the offer on Saturday.

The statement came a few days after the White House labeled the IRGC a “foreign terrorist organization,” drawing rebuke from many governments.

Saudi Arabia went out of its way to welcome the hostile move along with the UAE and Israel.

The IRGC – alongside Iran’s Army, voluntary groups, and locals – has been providing relief aid to those affected in unprecedented floods which have left at least 70 people dead.

Iran has repeatedly expressed readiness to cooperate with the Persian Gulf Arab countries, but those gestures have been ignored by Saudi Arabia which has supported Washington’s belligerent policy toward Tehran, instead.

The US has frozen bank accounts of the Iranian Red Crescent Society (IRCS) as part of its unilateral sanctions against the Iranian people, making it almost impossible for foreign aid to reach the flood victims.

Under the Trump administration, the US has taken an increasingly hawkish posture toward Iran.

It has also been pushing forward a plan to establish a NATO-like regional alliance to confront Iran. Saudi Arabia and the UAE are members of the so-called “Arab NATO” envisioned by the US.

On Thursday, however, Reuters reported that Egypt had turned its back on the anti-Iran alliance.