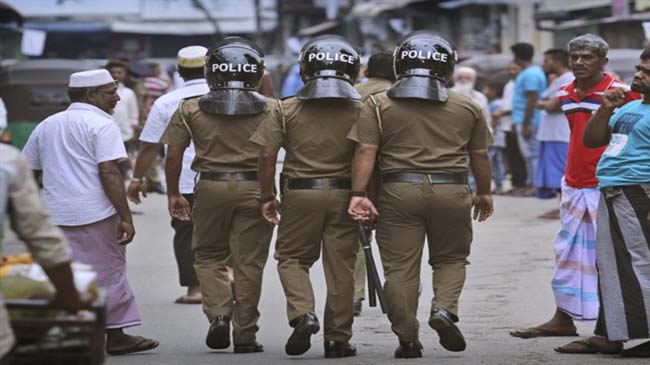 Authorities in Sri Lanka arrested a Saudi-educated preacher over links with the suspected mastermind of bombings last month, throwing a spotlight on the role of Salafi-Wahhabi terrorism in South Asia.

Several bomb attacks hit churches and luxury hotels in the Sri Lankan capital of Colombo and two other cities on April 21, killing at least 253 people, according to Press TV.

Sri Lankan police found the Nations Thawahid Jaman (NTJ) of having plotted the terrorist act and the group’s founder, Zahran Hashim, of having masterminded the blasts. Hashim blew himself up at a hotel in Colombo on the day of the carnage.

On Saturday, police announced the apprehension of Mohamed Aliyar, who is the 60-year-old founder of a religious center in Zahran’s hometown of Kattankudy on Sri Lanka’s eastern shores.

“Information has been revealed that the suspect arrested had a close relationship with … Zahran and had been operating financial transactions,” the statement said.

Police said Aliyar was “involved” with training in the southern town of Hambantota for the group of bombers who attacked hotels and churches on Easter.

Reports said Aliyar founded the center in Kattankudy in 1990, a year after he graduated from the Imam Muhammad ibn Saud Islamic University in Riyadh.

The education reportedly marked a key moment in the spread of Salafi and Wahhabi doctrine in Kattankudy and the center was partly funded by Saudi and Kuwaiti donors, according to a plaque outside.

Residents also said Hashim frequented the center and was a troublemaker, who they had warned authorities about his extremist views.

Reuters cited two Muslim community sources in Kattankudy as saying that Hashim’s hardline views were partly shaped by ultraconservative Salafi-Wahhabi texts that he picked up at the center’s library around two or three years ago.

“I used to always run into him at the center, reading Saudi journals and literature,” said one of the sources.

During that time, Hashim would rebuke the practice of asking God for help, for instance, claiming that such pleas were an affront to pure Islam.

“That kind of teaching was not in Sri Lanka in 2016, unless you read it in Salafi literature,” the source added, requesting anonymity to avoid repercussions in Kattankudy.

Salafism is closely linked to Wahhabism which has its roots in Saudi Arabia and is backed by its rulers. The radical ideology has been subject to harsh criticism.

In the aftermath of the deadly blasts in Sri Lanka, Muslim groups say they have received dozens of complaints from across the island country about people from the community being harassed at workplaces, including government offices, hospitals and in public transport.

Muslim community leaders say they had repeatedly warned the authorities about Zahran for years.

“The government knew about the bombings and yet they didn’t take any action. But once it happened, they are targeting us innocent people. This is not fair,” said Milhan, a resident in the northwestern town of Puttalam.

Additionally, a ban on facial veils and house-to-house searches by security forces in Muslim-majority neighborhoods across the country have added to the distrust.

Many Pakistani refugees said they fled the city of Negombo after threats of revenge from locals.

“The suspicion towards them (Muslims) can grow and there can be localized attacks,” said Jehan Perera of nonpartisan advocacy group, the National Peace Council.

“That would be the danger.”

The Sri Lankan government said it was closely monitoring the situation to curb radicalization but conceded that communal tensions were a big concern.

Muslims make up nearly 10 percent of Sri Lanka’s population of 22 million, which is predominantly Buddhist.