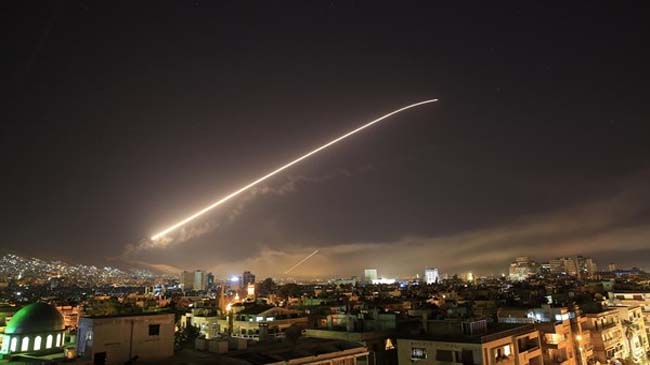 It noted that the Syrian Army’s air defense systems were activated right after Israel’s missile attack and destroyed two missiles before they could hit their targets.

Meantime, two Syrian soldiers were killed and two others were wounded after several missiles hit an ammunition depot, several buildings and military equipment.

Israel’s recent missile attacks on Syria came as the Syrian army is advancing in terrorist-held regions in Northern Hama and Southern Idlib.

In a relevant aggressive move by Tel Aviv regime on Sunday, Israel launched fresh airstrikes on the Syrian Army positions near Damascus and Quneitra in Southern Syria.

It noted that Israel’s invaders launched two waves of missile attacks from the side of the Occupied Golan, hitting  several military positions of the Syrian Army to the Southwest of Damascus and East of Quneitra.

The SANA news agency reported that the Syrian Army’s air defense systems were activated right after these attacks and shot down a number of Israeli missiles.

Meantime, the Arabic-language website of the Russian Sputnik News Agency quoted a military source as saying that Israeli warplanes fired six rockets at the Syrian Army’s military positions near Damascus, but most of them were destroyed by the Syrian air defense systems.

The Syrian Army’s air defense shield also destroyed most of the missiles fired at Tal al-Sha’ar region in the surrounding area of Quneitra. Three Syrian Army soldiers were killed and seven others were wounded in the Israeli aggression.

Meantime, the Israeli Army in a statement claimed that the Israeli helicopters and fighter jets had pounded the Syrian Army’s military positions in response to two missiles fired from Syria.