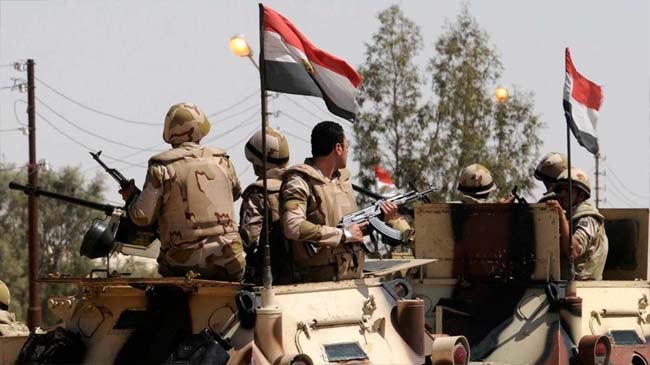 At least eight Egyptian security men were killed on Wednesday when militants opened fire at a checkpoint in the North Sinai province, state media reported.

“One officer, one conscript and six soldiers were killed and three other security men were wounded in the attack. The wounded were transferred to El-Arish Public Hospital,” a security official told Xinhua.

The exchange of fire has left five militants killed, he added.

“The checkpoint is currently surrounded by the army and police,” the official said.

The security forces have been combing the area to trace the fled gunmen, the report added.

The attacks were carried out at the start of Eid al-Fitr, which marks the end of the holy Muslim fasting month of Ramadan.

No group has so far claimed responsibility.

The Sinai Peninsula has been under a state of emergency since October 2014, after a deadly terrorist attack left 33 Egyptian soldiers dead.

Over the past few years, terrorists have been carrying out anti-government activities and fatal attacks in Egypt, taking advantage of the turmoil that erupted after the country’s first democratically-elected president, Mohamed Morsi, was ousted in a military coup in July 2013.

The Velayat Sinai group, which is affiliated with Daesh [the Arabic acronym for terrorist ‘ISIS/ISIL’ group], has claimed responsibility for most of the assaults.

Last year, the Egyptian army launched a full-scale counterterrorism campaign on an order by President Abdel Fattah el-Sisi, after a terror attack in North Sinai claimed the lives of more than 300 people at a mosque.