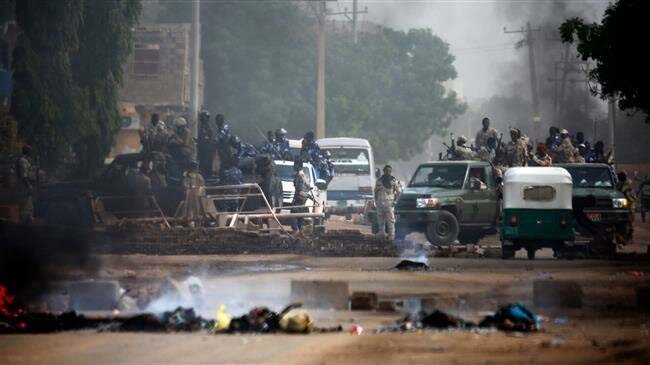 The death toll from a crackdown by the Sudanese army on a sit-in in the capital, Khartoum, has nearly doubled, medics say.

A doctors’ group associated with the protesters in the African country said on Wednesday that 60 people were now dead as a result of the “clearance operation” on the protest sit-in outside the military headquarters in Khartoum that was launched on Monday.

Initially, 35 people had been reported killed.

More than 300 other people have also been wounded, according to the doctors’ group.

The protesters have been camped outside the headquarters to demand that the ruling generals in the country hand over power to a civilian body.

The generals took over in April, after they ousted president Omar al-Bashir, who had himself assumed power in a coup d’état. Bashir had faced weeks of popular protests, and while the generals initially seemed to fulfill the will of the people, they later moved to consolidate power and faced popular protests themselves.

Protest leaders later began negotiating with the generals in an attempt to work out a peaceful transition, and while the two sides had made some progress in the talks, the negotiations abruptly broke down in May over remaining disagreements.

The protest movement then called a general strike, and tensions soared.

Then came the crackdown on the sit-in.

The United Nations Security Council has condemned the violence, urging Sudan’s Transitional Military Council (TMC) to ensure the safety of the people.

The TMC on Tuesday scrapped all agreements with the protesters and called an election.

Meanwhile, the Sudanese Professionals Association (SPA), which spearheaded the anti-government protests that led to Bashir’s ouster, rejected the TMC’s decision on Tuesday.

“It’s not the putschist council, nor its militias, nor its leaders who decide the fate of the people, nor how it will transition to a civilian government,” the SPA said, adopting a visibly harsher tone toward the generals.

It also called on people to hit the streets and topple the ruling military regime, in what is likely to prolong the political crisis in the country.