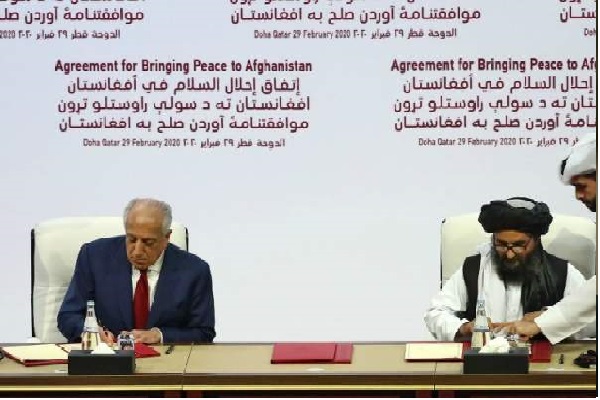 After 19 years of war between the United States and Taliban, both sides have signed deal for complete withdrawal of forces from Afghanistan.

US Special Representative for Afghanistan Reconciliation Zalmay Khalilzad and Taliban co-founder Mullah Abdul Ghani Baradar sign a peace agreement during a ceremony in the Qatari capital Doha on February 29, 2020. – The United States signed a landmark deal with the Taliban, laying out a timetable for a full troop withdrawal from Afghanistan within 14 months as it seeks an exit from its longest-ever war. Pompeo called on the Taliban to honour its commitments to sever ties with jihadist groups as Washington signed a landmark deal with the Afghan insurgents.

US officials and Taliban representatives on Saturday signed a final deal after months of negotiations in the Qatari capital of Doha to end the United States’ longest war.

US Secretary of State Mike Pompeo, who earlier arrived in Doha, witnessed the signing of the accord.

The Taliban have agreed to sever ties with al-Qaeda and other terror groups and sit down for peace talks with the Afghan government. In return, Washington will start a phased withdrawal of troops.

Mohammed Naeem, a Taliban representative in Doha, described the deal as “a step forward.”

Commenting on the accord, another senior Taliban official also said that the US was forced to leave after suffering humiliating defeats at the hands of the militant group and lost ground across Afghanistan in recent years.

“There is no doubt we have won the war, there is no doubt, otherwise the foreign forces (would not) have come to leave Afghanistan,” AFP quoted Abbas Stanikzai, a Taliban negotiator, as saying.

Meanwhile, US Secretary of Defense Mark Esper spoke during a press conference attended by Afghanistan’s President Ashraf Ghani and NATO Secretary General Jens Stoltenberg at the presidential palace in Kabul to lay out a timetable for a gradual troop withdrawal from Afghanistan.

The accord comes after a week-long partial truce that has mostly held across Afghanistan. Earlier on Saturday, the Taliban ordered all its fighters to halt fighting and “refrain from attacks.”
Over the past week, nearly 20 Afghan security forces and four civilians have been killed – a marked decrease compared with previous weeks – fatalities the Afghan government attributed to the Taliban.

Minutes before the deal was signed, a joint statement released by the US and the Afghan government said that the American and NATO troops would withdraw from the war-raved country within 14 months.

The deal also proposes an intra-Afghan dialogue with the government in Kabul and the release of 5,000 Taliban members from prison.

Experts say the Afghan government and the Taliban should map out important questions on the country’s future in their negotiations, rather than the US and the Taliban. Further reductions in violence now seem to depend on the Taliban’s engagement with the administration of President Ghani, who had been until now kept out of talks.

However, such talks could take time due to certain divisions between President Ghani and Chief Executive Abdullah Abdullah.

Last week, Abdullah contested the results of the presidential elections after incumbent Ghani was declared the winner.

Any future political process in the country would be challenging unless the two rivals resolve their differences.

The US began covert talks with the Taliban in 2013.

The direct US-Taliban talks were launched in 2018 as part of a push by US President Donald Trump’s administration to strike a deal with the militant group.

The two sides were on the verge of signing a peace agreement in September last year when Trump abruptly canceled the talks after a Taliban attack killed an American soldier.

The intra-Afghan talks are to begin on March 10 but no specific details have been given.

The Taliban have so far refused to speak to the Afghan government, saying it is a “puppet regime.”

About 14,000 US troops and approximately 17,000 troops from NATO allies and partner countries are stationed in Afghanistan.

Trump has long expressed eagerness to bring US soldiers home and to end the country’s longest war as he seeks re-election in 2020.

Since the US-led invasion that ousted the Taliban after the September 11, 2001 attacks, America has spent more than $1 trillion in fighting in Afghanistan.

About 2,400 US soldiers have been killed, along with unknown tens of thousands of Afghan troops, Taliban militants and Afghan civilians.

Over 100,000 Afghans have been killed or injured since 2009 when the UN Assistance Mission in Afghanistan began documenting casualties.

The Taliban now control or hold influence over more Afghan territory than at any point since 2001 and have carried out near-daily attacks against US-led foreign forces and Afghan military outposts throughout the war-ravaged country.

The militants have long demanded the withdrawal of foreign troops, calling them an “occupation” force, and blaming them for the almost two decades of war.

In 2017, the longest-serving NATO commander in Afghanistan, General John Nicholson, described the war under his command a  “stalemate.”

Last week, Sirajuddin Haqqani, deputy leader of the Taliban, confirmed in his op-ed for the New York Times that the Taliban had had enough, writing, “Everyone is tired of war.” “[It] has exhausted everyone.”