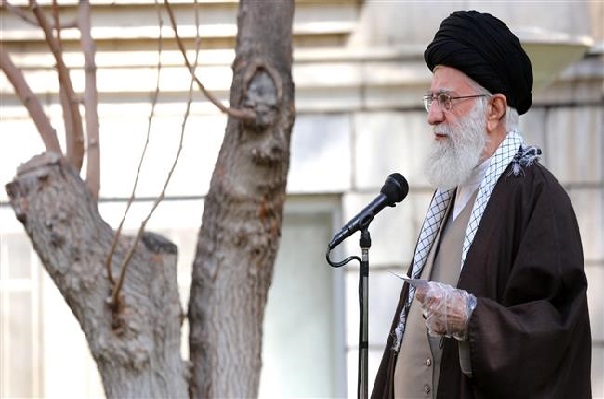 Leader of the Islamic Revolution Ayatollah Seyyed Imam Ali Khamenei has called on all Iranians to help boost the country’s battle to stem a growing coronavirus epidemic by paying close heed to the directives and guidelines issued by heath officials.

Ayatollah Khomeini made the remarks on Tuesday after he planted two saplings, an annual tradition in honor of National Arbor Day and Natural Resources Week.

He once again thanked doctors, nurses and the country’s entire medical community for their invaluable endeavors, saying they are “engaged in jihad on the path of God.”

The Leader also expressed his gratitude to the medics’ families who are exercising patience while their loved ones are making round-the-clock efforts to rein in the disease.

Ayatollah Imam Khamenei laid emphasis on the need for public attention to guidelines issued by health authorities aimed at containing the coronavirus outbreak.

An Iranian minister says the production of disinfectants and hygiene items has at least doubled over the past two weeks as the country beefs up efforts to contain a coronavirus outbreak.

“These orders should not at all be violated as God has obliged us to take responsibility for our own health and for that of others; therefore, anything that contributes to the society’s health and helps prevent the spread of the disease is a virtue and, [on the contrary], whatever facilitates its spread is a sin.”

The Leader further assigned all government entities, his own office, as well as the Armed Forces with the task of fully cooperating with the Health Ministry, which is at the forefront of the fight against the coronavirus.

Ayatollah Imam Khamenei gave assurances that the disaster was only transient and not of monumental dimension, and that it could be brought under control in due time.

“Of course, I don’t mean to underestimate the issue, but we should not also exaggerate it either. This issue will not last long and will pass, but the experience it brings as well as the efforts made by the people and institutions are like a collective exercise that could be used as an achievement,” the Leader said.

Ayatollah Imam Khamenei also lauded the Iranian officials’ “transparency and honesty” in disseminating information about the outbreak, whereas “there is a cover-up in certain other countries, where this disease is more severe and more widespread.”