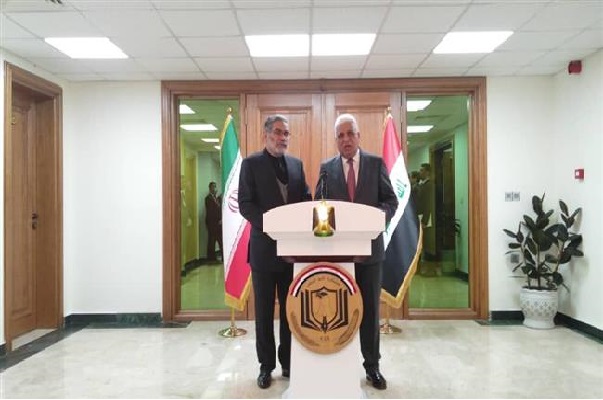 Shamkhani met Iraq’s adviser of the National Security Council Falih Fayyad on Sunday and discussed security and regional issues and Baghdad’s role in the developments of the region.

In their joint news conference later, the Iranian official touched on Israeli acts of aggression, saying “the Zionists are against regional stability and security”.

“We hope the day will come when the region we will see no trace of the Zionists,” Shamkhani said.

The Islamic Republic of Iran, he said, has always wished stability and peace for Iraq.

Shamkhani has traveled to Baghdad to hold talks with Iraqi officials and political leaders on security and political issues as well as boosting relations between the two neighbors.

Iran, he said, has maintained good brotherly relations with neighboring Iraq since the ouster of former dictator Saddam Hussein in 2003.

In 2014, when Daesh unleashed its campaign of terror in Iraq, Iranian military advisers rushed to the aid of Iraqi armed forces on Baghdad’s request, helping them gradually reverse the Takfiri terrorist group’s gains and ultimately liberate their entire homeland some three years later.

“The Iraqi people and government will not forget the Islamic Republic of Iran’s help in defeating Daesh,” Fayyad said.

He said, “Today, cognitive war as an aspect of the hybrid warfare has replaced the sedition of terrorism and the creators and sponsors of Daesh are trying to achieve their unrealized goals with less costs.”

Shamkhani’s trip comes in the wake of the US assassination of the Middle East’s most prominent anti-terror commander General Qassemi Soleimani and his Iraqi trenchmate Abu Mahdi al-Muhandis in Baghdad in January.

General Soleimani was in Baghdad at the invitation of the Iraqi government when he was targeted.

The terrorist act led to a crisis in diplomatic relations between the US and Iraq which demanded that the American troops leave the country after the Iraqi parliament voted for their ouster.

The Trump administration has been defiant and instead threatened to seize Iraq’s oil money being held in a bank account in New York as compensation for its military presence in the Arab country.

Meanwhile, some individuals in Iraq’s intelligence agency have been implicated in the assassination. It is not clear if the issue will feature in the Iranian security official’s talks in Baghdad.

Shamkhani said the move by the Iraqi government, parliament, and nation, which in their millions demanded the expulsion of American troops “deserves special recognition”.

Elsewhere in his remarks, Shamkhani referred to the outbreak of a new coronavirus in the region, saying that both facts and rumors were spreading about the epidemic.

The fact is that the Islamic Republic is in possession of abundant resources and will score a victory over the epidemic, he noted.