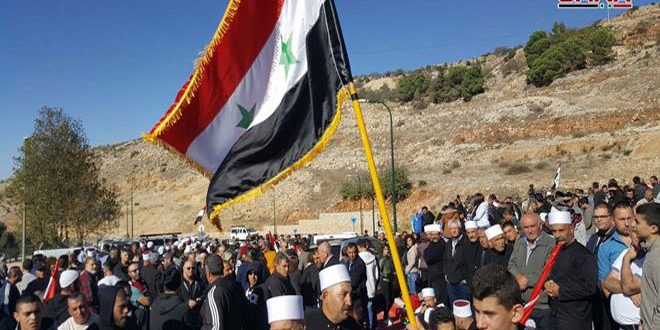 People of the occupied Syrian Golan next Thursday will commemorate the anniversary of the open strike against Israeli occupation’s decision to annex the Golan which has become an annual tradition through which the Syrian people express their adherence to their identity and their rejection of any form of occupation.

On the 37th anniversary of that heroic strike, people of the occupied Syrian Golan reaffirm their determination to continue their struggle in the face of all the colonial Israeli schemes which aim at Judaizing the Golan and their adherence to their Syrian Arab identity , expressing confidence that every inch of the occupied Golan will be liberated.

On Feb. 14th 1982, people of the occupied Syrian Golan announced an national strike that lasted for six months and they held massive demonstrations at the Golan’s village to express their categorical rejection of that ominous decision which was issued by the occupation authorities on December 14th 1981.

In a phone call with SANA’s reporter in Quneitra, Sheikh Suleiman al-Maqt from Majdal Shams town affirmed that people in the occupied Syrian Golan reject all the Israeli practices which aim at Judaizing the Golan and usurping it from the Syrian sovereignty and annexing it to the Zionist entity.

Sheikh Fares Shams, from occupied village of Baqaatha, said in a similar phone call that the Israeli heinous decision to annex the Golan is null and void as it is issued by illegal occupation authorities and the Golan will preserve its identity and belonging to the homeland Syria.

Sheikh Mazyad Mas’aoud, from the occupied village of Mas’ada, said that the arbitrary and repressive practices of the Israeli occupation against the Syrian people in the occupied Golan and the continued attempts to usurp more of their lands and properties under flimsy pretexts have become clear to the whole world and they will not affect the steadfastness of the Syrian people in Golan or their belonging to their homeland.

Sheikh Atef Suleiman from Ain Qinya village asserted that people of the occupied Golan will continue their resistance and their standing in the face of all the Israeli crimes and attempts which aim at changing the Golan’s demography and geography.