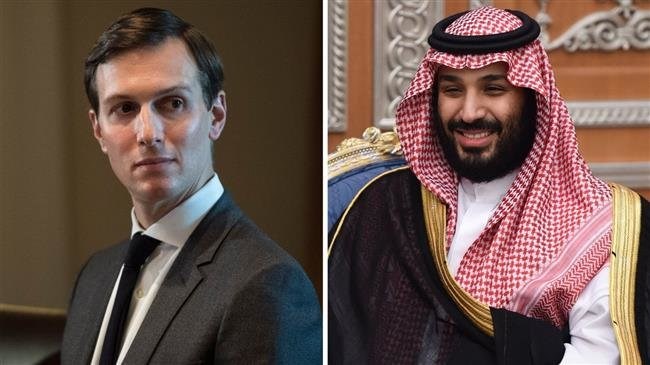 US President Donald Trump’s son-in-law and the senior adviser has quietly held talks in the Saudi capital, Riyadh, with King Salman bin Abdulaziz Al Saud and Crown Prince Mohammed as part of a tour of the Middle East.

The White House said in a statement on Wednesday that Jared Kushner met with the Saudi king and his son on Tuesday, and that they discussed American-Saudi cooperation, the Israeli-Palestinian conflict, and economic investment in the region, presstv.ir reported.

“Building on previous conversations, they discussed increasing cooperation between the United States and Saudi Arabia, and the Trump administration’s efforts to facilitate peace between the Israelis and Palestinians,” the statement read. “Additionally, they discussed ways to improve the condition of the entire region through economic investment.”

US Middle East envoy Jason Greenblatt and special representative for Iran Brian Hook were also present at the meeting, according to the White House.

Kushner has been touring the Middle East in a bid to garner support for the economic portion of Trump’s yet-to-be-unveiled plan on the Israeli-Palestinian conflict, which Trump himself has called the “deal of the century.”

Trump’s plan is said to be hugely in favor of the Israeli regime. Its unveiling has been postponed until after the April 9 Israeli elections apparently to favor the specific faction of Israeli Prime Minister Benjamin Netanyahu, who has forged a close relationship with the Trump administration.

Palestinians — angered by the Trump administration’s repeated overtures to the Israeli regime as well as leaks of the plan — have already rejected the initiative. President Mahmoud Abbas has called the plan “the slap of the century,” in a play on Trump’s chosen name for the deal.

Earlier this week, Kushner sat down with leaders in the United Arab Emirates, Bahrain, and Oman.

On Wednesday, he met with Turkish Recep Tayyip Erdogan in Ankara.

It is not clear why the Trump administration is continuing to promote the plan even though one of the two supposed parties to the deal — namely the Palestinians — has already rejected it.

Like his father-in-law, Kushner is a real estate businessman with no background in politics or diplomacy.  He has developed close personal ties with Mohammed, and it was their first meeting since the Saudi crown prince suffered an international credibility crisis over the murder of Saudi dissident Jamal Khashoggi in October last year. Mohammed is widely believed — including by the US’s own intelligence agency — to have ordered that murder.

Citing unidentified analysts with knowledge of the plan, The New York Times reported that it involved investing around 25 billion dollars in the West Bank and the Gaza Strip over 10 years and another 40 billion dollars in Egypt, Jordan, and perhaps Lebanon.

One source in the Persian Gulf region told Reuters that Kushner appeared to have ignored Arab leaders’ demands that the plan must address Israeli settlements, the rights of Palestinian refugees, and Jerusalem al-Quds.

Palestinians are angry with Trump’s recognition of Jerusalem al-Quds as the “capital” of Israel in December 2017 and the opening of the American embassy in the occupied city in May 2018. They have also stopped talks with the Israeli regime because of continued settlement construction deep in territories that they want as part a future state of their own.