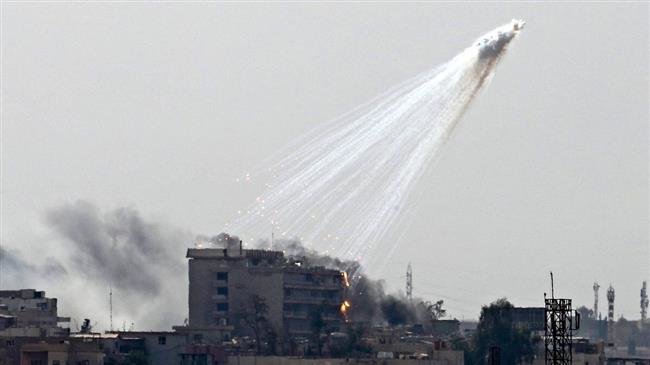 The US-led military coalition, which is purportedly fighting the Daesh Takfiri terrorist group in Syria, has used white phosphorus munitions in a bombing raid against an area in Syria’s eastern province of Dayr al-Zawr, local media say.

Syria’s official news agency SANA, citing local sources, reported on Saturday that US-led military aircraft conducted a bombing attack with white phosphorus munitions on the farmlands of the town of Baghouz in the volatile province.

The US-led coalition and the so-called Syrian Democratic Forces (SDF), which is supported by Washington, claim that they are fighting against the Daesh militants in the Arab country and that Baghouz, which is the last pocket of territory controlled by remnants of the terror group, is constantly under their fire and expected to be liberated soon.

The flashpoint town is located in the eastern Euphrates River region.

The US-led coalition has been conducting airstrikes against what are said to be Daesh targets inside Syria since September 2014 without any authorization from the Damascus government or a UN mandate. Washington has long been providing the SDF — a predominantly Kurdish alliance of militants — with arms and militants, calling them a key partner in the purported fight against Daesh.