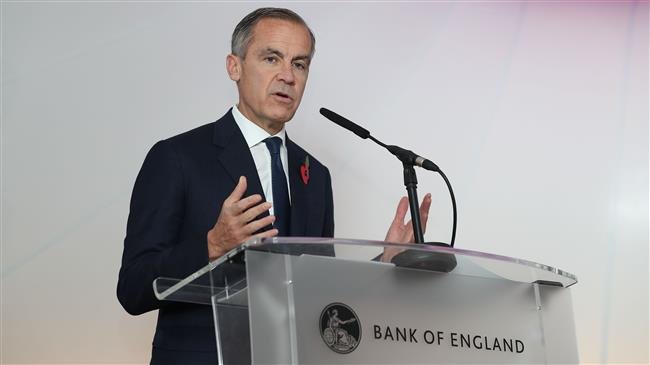 The Bank of England has warned of potential risks to financial stability in Britain and the European Union if London leaves the 28-member bloc without an agreement.

Mark Carney, the Governor of the Bank of England (BoE), told the House of Lords Economic Affairs Committee on Tuesday that a Brexit without an agreement could cause an “economic shock” for the country.

Carney warned that businesses and households across Britain as well as the EU were vulnerable even if a Brexit deal was clinched.

The BoE governor, however, said Britain’s preparations for a no-deal Brexit could help cushion the blow for the economy, adding that the British Central Bank had activated a swap line with the European Central Bank, which would provide euros in exchange for British pounds.

“Some disruption to cross-border services is possible and, in the absence of other actions by EU authorities, some potential risks to financial stability remain,” the BoE said in a statement.

“Although these would primarily affect EU households and businesses, they could also be expected to spill back to the UK in ways that cannot be fully anticipated and mitigated,” it added.

The BoE also announced that it was stepping up its lending facilities for commercial banks over the next few months to tackle financial transactions after the Britain’s separation from the bloc.

In the run-up to Brexit day, British authorities, including the Bank of England, have agreed with the United States to maintain how multi-trillion-dollar financial transactions are carried out between the two countries.

Britain is on course to leave the EU on March 29 although there has been increasing talk of a possible delay.