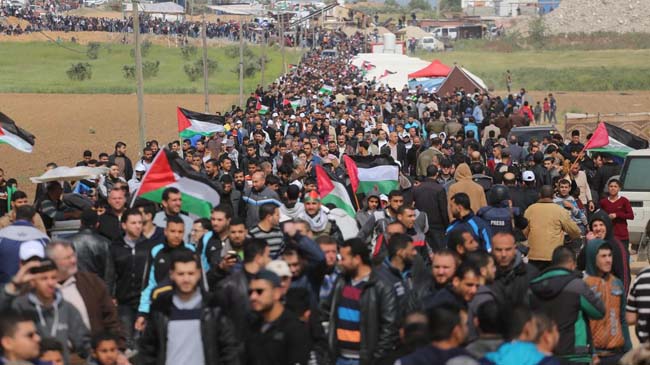 Weekly protests along the border between Gaza and the occupied territories were called off Friday after the Zionist entity launched a new aggression against the besieged enclave, organizers announced.

“In keeping with the public interest, the commission has decided to exceptionally postpone its activities scheduled for this day,” the body which organizes the protests said in a statement.

Protests will resume in the coming weeks, with particular preparation for the one-year anniversary of their beginning on March 30, it said.

The cancellation, the first of its kind in a year, came after Israeli occupation army said its aircraft struck dozens of Palestinian resistance targets in Gaza overnight in response to rockets fired from the enclave, including at Tel Aviv.

An official from the organizing committee, speaking on condition of anonymity, said the protests were delayed “to protect our people due to the escalation and the Israeli aggression.”

Palestinians in Gaza have been demonstrating as part of the Great Marches of Return for nearly a year since 30 March 2018, calling for an end to the crippling 11-year Israeli blockade of the small coastal enclave, as well as the implementation of the right of return for Palestinian refugees, who form an overwhelming majority of Gaza’s population.