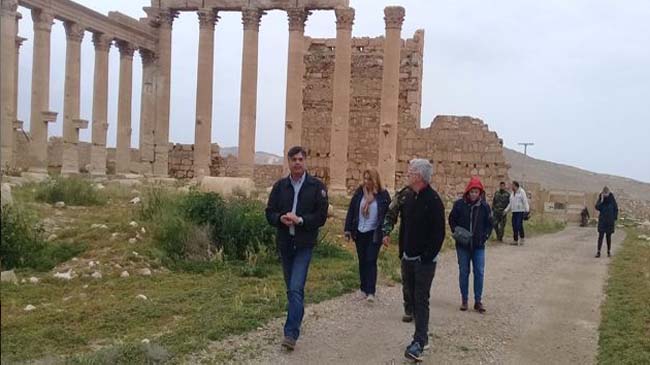 A delegation from the French school of Charles de Gaulle in Damascus on Friday visited Palmyra City to get acquainted with its deep-rooted culture and to see the extent of the destruction inflicted on its archeological monuments at the hands of Daesh (ISIS) terrorists before being crushed by the Syrian Arab Army.

The school’s director Christopher Cassan, in a statement to SANA, expressed pride for residing in Syria and he at the same time expressed deep regret for what he saw of barbaric destruction against the humanitarian heritage in Palmyra City at the hands of terrorists.

“I’m very sad…I find it very difficult to imagine that,” Cassan said, adding “I wanted to visit Palmyra to see the junction among cultures and the archeological richness in the city.”

He called upon his European friends, not only the French, to come to Syria in order to see the richness of its history, wishing that the country will recover again helped by its friends.

Meanwhile, Estella Rod, one of the teachers at the French school, after a tour in Palmyra archeological city, said “We respect this human heritage which belongs with its culture to the whole world,” expressing shock at the destruction inflicted on the city by terrorists.

“I am shocked at what I saw of destruction,” she said, wondering “Is there a man who thinks in this brutal way and who can destroy this civilization?…and why?”

Nadia Birbet, another teacher at the French school, affirmed that destroying the archeological monuments is a “humanitarian crime  which is unforgivable for  anyone not just the Syrians because the roots of history belong to every human being  all over the world and what the enemies of humanity have committed is a violence that can’t be forgotten.”