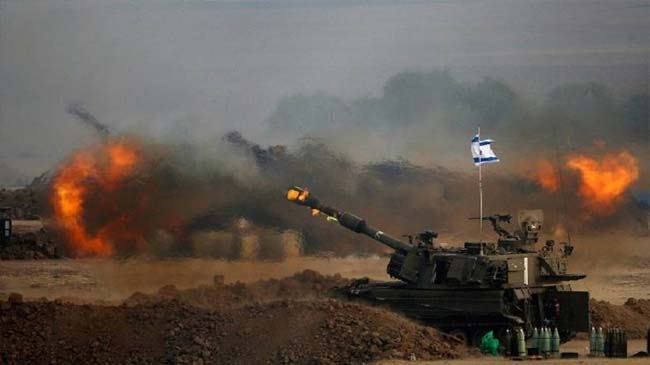 No reports have yet been released on the possible casualties of the attack.

Earlier, the United Nations International Children’s Emergency Fund (UNICEF) announced that at least 40 Palestinian kids have been killed during the March of Return rallies in Gaza Strip.

The great ‘March of Return’ rallies culminated on May 15 to mark what Palestinians refer to as the Nakba, or Catastrophe, a reference to the forced removal of 750,000 Palestinians from their homes and villages to clear the way for Israel’s establishment in 1948.

The mass Friday demonstrations have continued since then.

Since the protests began on March 30, Israeli forces have martyred at least 260 Palestinians in the besieged coastal enclave and wounded about 27,000 people, according to health officials in Gaza.

‘On 30 March 2019, it will be one year since regular demonstrations at the security fence separating the Gaza Strip from Israel began,” UNICEF website reported.

Earlier, Hezbollah movement announced that in a meeting between Lebanon’s Hezbollah Secretary General Seyyed Hassan Nasrallah and a Hamas delegation both sides discussed the latest developments in Gaza.

According to Hezbollah statement a copy of which seen by IRNA office in Beirut, Nasrallah and Saleh Al-Arouri, deputy head of Hamas political bureau discussed the latest developments in the region.

Since Monday evening, Gaza has witnessed bombardment by Israeli jetfighters.

Meanwhile earlier, the United Nations Human Rights Council (UNHRC) in a resolution condemned Israel’s intentional use of illegal and violent ways to stand against non-military protestors in Gaza Strip.