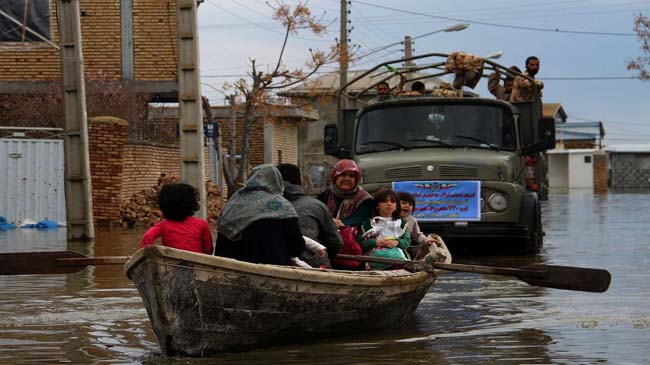 Iran’s naval forces intensified their relief operation in the flood-hit Province of Golestan, with a focus on reopening the half-blocked waterways leading to the Caspian Sea, commander of the forces said.

‘The situation in the flood-hit areas is being regularly assessed and inspected so that we can use the naval forces capacities to lead the flood water to the Caspian Sea and decrease damages caused to the town of Gomishan,’ Admiral Hossein Khanzadi said Friday evening after visiting flood-stricken areas in the Province of Golestan in north of the country.

The logistic equipments are deployed to the areas and the naval forces are engaged in rescue and relief operations, he said.

The commander noted that the faster the flood leaves the areas, the less the damages will be to the buildings and infrastructures.

He stressed that the Navy is ready, along with all other Iranian armed forces, to render services to the affected people.

Unprecedented heavy rains caused floods in various parts of Iran over the past two weeks. Scores of people were killed and injured and a large number were displaced across Iran.

On the beginning days of the floods, Iran’s Supreme Leader Ayatollah Ali Khamenei called on all Iranian Armed Forces to step in for consolidating relief operations.