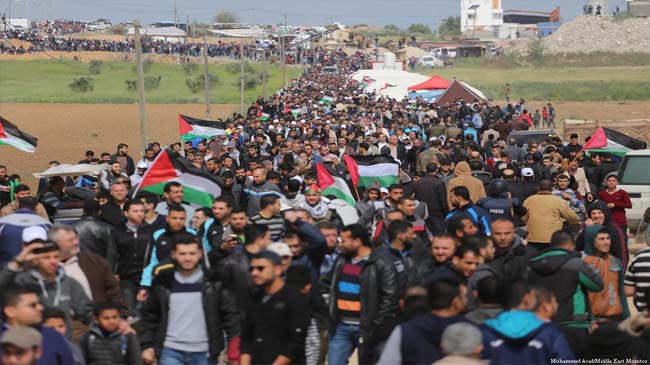 Weakly border protests, known as the Great March of Return, are continuing in Gaza for the second year, with Palestinian readying on Friday to take part in the 53rd week of rallies.

The Higher National Commission of the Great March of Return issued a statement on Thursday, in which it called on Gazans to take part in Friday protest, which is this week under the banner of “Friday of Dignity Triumph”.

The committee meanwhile, hailed Egyptian efforts in a bid to unite Palestinians and end the Israeli siege on Gaza.

Palestinians in Gaza have been demonstrating as part of the Great March of Return for nearly a year since 30 March 2018, calling for an end to the crippling 11-year Israeli blockade of the small coastal enclave, as well as the implementation of the right of return for Palestinian refugees, who form an overwhelming majority of Gaza’s population.