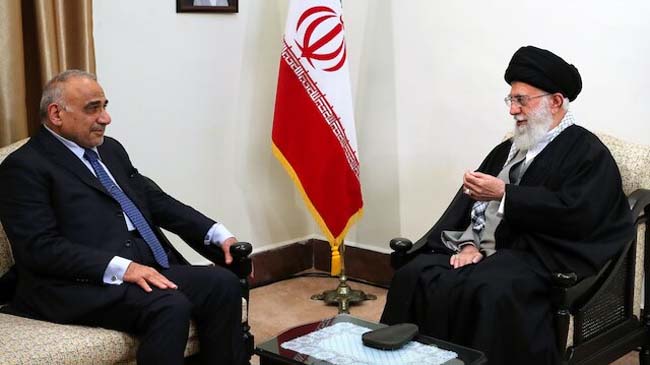 In this meeting, the Supreme Leader of the Islamic Revolution—Ayatollah Imam Khamenei—pointed out to the ideological, cultural and historical convergence among the Iranian and Iraqi nation and stressed: The relations between the Islamic Republic of Iran and Iraq is beyond simple ties between two neighboring countries and the Iranian nation and state consider the progress and prosperity of the Iraqi nation as part of their own interests; however, the U.S. officials—contrary to their verbal remarks—assume the democracy and the current assembly of political activists in Iraq as detrimental to themselves. Therefore the Iraqi government should take actions so that U.S. troops will leave Iraq as soon as possible.

Appreciating the wise and plausible positions taken by Mr. Adil Abdul-Mahdi with respect to the matters in Iraq and the region, the Leader of the Islamic Revolution referred to human capacities of Iraq and held: Among

human resources of Iraq are its youth who proved their potentials in countering the ISIS sedition, and that was a historic event.
Ayatollah Imam Khamenei also named the scientists and scholars of Iraq as another asset of Iraq and went on to say: At the early periods of its presence in Iraq, the U.S. assassinated many of the Iraqi scientists; because they understood the importance of this valuable asset.

Emphasizing on the fact that human assets and rich mineral resources in Iraq have made this country the most influential country of the Arab world, his Eminence stated: The U.S. officials and their followers in the region are against the current democratic establishment in Iraq as well as the officials and the chief leaders and regard them as offensive to their own interests.

Stressing that if the Iraqi government and officials followed the U.S., the U.S. would have no problems with Iraq, he added: The current government and parliament in Iraq and the political figures are not what the U.S. desires; as a result, they plot for removing them from the political scene of Iraq.