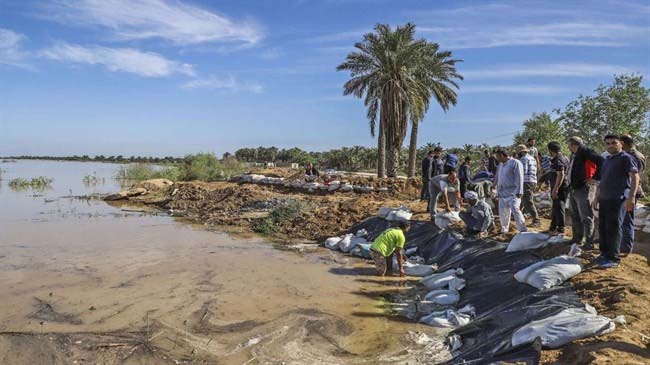 Iranian authorities ordered the evacuation of six cities along the Karkheh River in southwestern Khuzestan Province on Saturday after more rain sparked fears of new flooding.

Many residents of Sussangerd, with a population of about 50,000, and five other cities alongside the Karkheh River in southwestern Iran were being moved to safer areas, Khuzestan Governor Gholamreza Shariati told IRNA.

The oil-rich province of Khuzestan has an extensive range of dams, which have swelled upstream due to fresh downpours.

The floodwater intensity has forced authorities to open emergency discharges at Karkheh Dam, one of the largest in the area, thus sparking fears of fresh flooding.

“The inflow into the Karkheh River dam has been high … and officials have had to release more water as the dam was approaching its full capacity,” Shariati said, adding the flooding was the worst in 70 years.

The situation appears to be “critical”, he said.

“An evacuation order has been issued and we are recommending women and children to leave but we are asking the men and youth to stay and help us build floodwalls, so we can keep the water out of these cities,” Shariati said.

Eleven towns and scores of villages have been already evacuated. There have been no evacuation orders for major cities, including the provincial capital of Ahvaz, which has 1.7 million residents.

Interior Minister Abdolreza Rahmani Fazli warned that up to 400,000 people in Khuzestan could be exposed to the floods, IRNA reported.

Iran, a usually arid country, has been hit by unprecedented flooding across most of the country since mid-March with 70 people killed, according to the country’s emergency services.

The worst hit in the latest deluge was the neighboring Lorestan Province where in some cities whole neighborhoods were washed away and many villages are still cut off. Seven villages threatened by landslides there were to be evacuated.

Fourteen deaths have been reported from Lorestan so far.

About 1,900 cities and villages have been affected by floods after heavy rains since March 19.