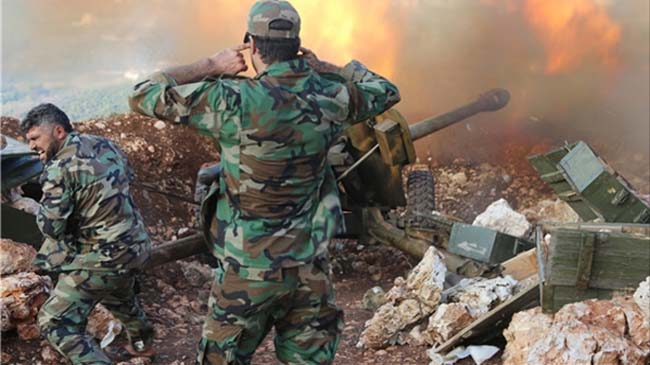 The Syrian Army pounded and destroyed the terrorists’ movements and positions in Northern Hama in response to their continued attacks from the demilitarized zone on safe areas and military points there.

The Syrian Army’s artillery and missile units hit the military positions of Tahrir al-Sham al-Hay’at (the Levant Liberation Board or the Al-Nusra Front) in the city of al-Ankavi and the town of al-Hawiz in Northern Hama, destroying a number of their hideouts and concentration centers as well as killing several militants.

The Syrian Army’s artillery units also pounded the terrorists’ movements in the towns of Shehr Naz in Shahshabou Mountains, the surrounding areas of al-Maziq Castle, al-Sohriyeh and al-Hawija in Western Hama, killing and wounding a large number of them as well as destroying their military equipment.

In a relevant development on Friday, the Syrian army destroyed the key strongholds of Tahrir al-Sham al-Hay’at in response to the terrorist group’s attacks from the demilitarized zone on safe areas and military points in Hama and Idlib.

The Syrian army units responded to the terrorists’ missile strikes on residential areas in the town of Mahradeh in Northern Hama which killed and wounded several civilians, with artillery and missile fire, smashing Tahrir al-Sham strongholds in the towns of Kafr Zita and al-Hawir in the Northern parts of Sahl al-Ghab in Northern and Northwestern Hama and leaving several militants dead.

Meantime, the Arabic-language service of Sputnik reported that the army troops launched artillery attacks on terrorists’ moves and positions in al-Tah, al-Tamane’ah, al-Khuwain, al-Zarzour and Khan Sheikhoun in Southeastern Idlib, destroying several positions of the terrorists.

It added that 5 Syrian army soldiers had been killed during Horras al-Din terrorist group’s guided missile attacks on the town of Sham al-Haqa in Southeastern Idlib on Thursday.