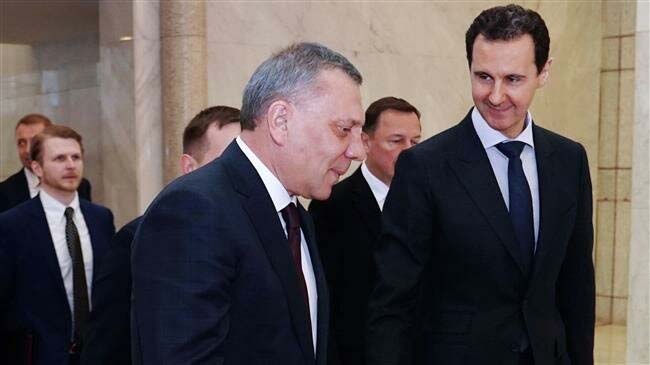 During a meeting in the Syrian capital Damascus on Saturday, President Assad and Borisov exchanged views about ways to improve bilateral cooperation in all fields on different levels and the agreements signed between the two countries in the energy, industry, and trade sectors, the Syrian Arab News Agency SANA reported.

It added that the two sides also reviewed feasible mechanisms to overcome all the obstacles facing the implementation of the agreements, including the West’s sanctions on Syria, and to promote cooperation in new sectors in a way that would serve the interests of the two nations.

Borisov, who is also the chairman of the Joint Syrian-Russian Committee for Trade, Economy, Science and Technology Cooperation, briefed President Assad on the implementation of the agreements and the obstacles hindering their fulfillment.

He expressed his country’s intention to further support Syria against terrorism until the menace is totally eliminated and security and stability are fully restored to Syria.

Moscow is determined to play a role in Syria’s reconstruction process and to support it in difficult circumstances caused by the economic and terror wars against the country, the Russian envoy pointed out.

“After our meeting in December, we proceeded within the

reached agreements and so far expect no breakdowns of planned actions. I am convinced that all our efforts aimed at Syria’s economic revival will be successful,” Borisov said.

Back in December, Borisov’s office said that the diplomat had discussed industrial, medical, and energy cooperation with President Assad in Damascus.