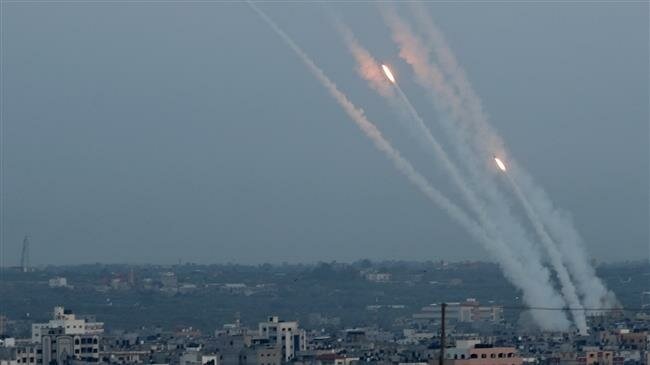 Hamas says Israel scrambled to seek a ceasefire in its recent military aggression against Gaza through mediators after the Palestinian resistance increased the range of their retaliatory rockets.

In an interview with the Palestinian al-Aqsa TV channel on Wednesday, Khalil al-Hayya, a senior member of the Hamas political bureau, hailed the Gaza Joint Chamber of Military Operations — which comprises various resistance factions —for standing firmly against the enemy in the recent confrontation with the Tel Aviv regime.

He added that the regime sent representatives for talks with senior members of the Palestinian resistance front after the range of the rockets fired from Gaza towards the Israeli-occupied territories surpassed 40 kilometers.

The Gaza escalation erupted last Friday following the deaths of four Palestinians in an Israeli air raid on the coastal sliver and the regime’s live fire targeting Gaza protesters.

Israeli warplanes struck some 350 sites in Gaza, claiming the lives of 27 Palestinian people.

In response, the Palestinians fired some 700 rockets at the occupied lands between Saturday morning and early Monday morning, killing four Israelis and injuring 200 others.

Israel’s “Iron Dome” only intercepted 240 of the 690 projectiles fired from Gaza, raising serious questions about the effectiveness of the missile system.

After three days of deadly Israeli airstrikes and retaliatory Palestinian rocket attacks, the two sides reached a ceasefire agreement on Monday with the help of Egyptian and Qatari mediators.

The Hamas military wing, the Ezzedine al-Qassam Brigades, said on Monday that it had succeeded in overcoming Israel’s so-called Iron Dome missile system during the latest confrontation with the regime thanks to its new rocket-launching tactic.

The new tactic saw the Gaza-based resistance fighters overwhelm Israel’s “Irone Dome” by “firing dozens of missiles in one single burst” towards the occupied territories, it added.

However, the truce angered the Israelis living south of the occupied territories, who were most affected by the flare-up. They censured the Tel Aviv regime for failing to ensure their security.

Hayya further said, during the fresh flare-up of Gaza tensions, things went out of control due to Israel’s procrastination in implementing the ceasefire understandings and the regime’s firing at Palestinians in the anti-occupation Great March of Return protests, he added.

Hayya also stressed that Hamas would not bargain over the March of Return demonstrations, which began on March 30, 2018, with the participants demanding the right to return for the Palestinians driven out of their homeland by Israeli aggression.

He further warned that Israel’s continued blockade of the Gaza Strip could blow up the situation at any moment.