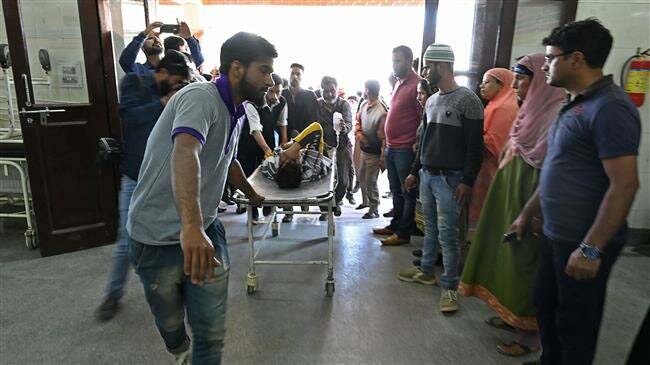 A man has been killed and at least 70 people have been injured during clashes between protesters and New Delhi forces in Indian-administered Kashmir.

Some fifty people were taken to a local hospital after Indian government troops fired shotgun pellets and live bullets to push the protesters back in south Kashmir’s Kulgam district on Wednesday.

Witnesses said that thousands of villagers poured onto roads as two suspected fighters fought a gun battle with soldiers from inside a house in the area. Protesters pelted government forces with stones to give the fighters cover to escape, they said.

“The house was blown up but the militants escaped in the confusion. No dead bodies were found in the debris,” AFP quoted the officer as saying.

The officer said, however, that only three people were wounded in the clashes, one with a bullet and two with pellets in their eyes.
“Scratches cannot be considered injuries,” he said, to explain the discrepancy in numbers.

Separately, hundreds of villagers also clashed with government forces later in Shopian district after soldiers laid siege to a residential area looking for suspected armed fighters. A local police official said one man was killed and another 20 people were injured in firing by government forces as a gunfight raged between fighters and soldiers.

This comes as protests in support of the surrounded fighters have increased in the Himalayan region. Residents from nearby villages often throng the streets to help fighters by hurling stones at Indian soldiers.

In the latest deadly incident on May 16, at least eight people, including six Kashmiri fighters, an Indian soldier and a local civilian, were killed during a gun battle in Kashmir.