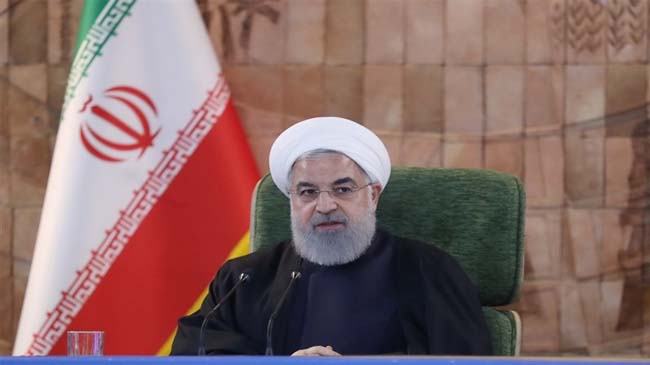 Iranian President Hassan Rouhani stressed his country’s continued support for Quds and the oppressed nations, saying that the Palestinian people are now able to respond to Israel’s missile attacks with home-made missiles.

“The Palestinian people once had stones to defend themselves but today, with their efforts, sacrifice and indigenized industry, they have instruments to give a crushing response to the Israelis and today, missile is the response of missile,” Rouhani said, addressing a cabinet meeting in Tehran on Wednesday.

He added that the Palestinians recently forced the Zionists to stop their attacks after 48 hours and Israel’s “Iron Dome” failed against missiles fired by the Palestinian resistance groups.

President Rouhani, meantime, warned of increased crimes by the big powers, saying, “They are sending modern weapons to the region and bombing the oppressed Yemeni and Palestinian people.”

He underscored the importance of the International Quds Day rallies across the world, saying that the message of the Quds Day is that “we will never forget Quds and the oppressed people in history and will not leave them alone and will not keep mum against the oppressors”.

The Gaza escalation erupted earlier this month following the deaths of four Palestinians in an Israeli air raid on the coastal sliver and the regime’s live fire targeting Gaza protesters.

Israeli warplanes struck some 350 sites in Gaza, claiming the lives of 27 Palestinian people.

In response, the Palestinians fired some 700 rockets at the occupied lands, killing four Israelis and injuring 200 others.

Israel’s “Iron Dome” only intercepted 240 of the 690 projectiles fired from Gaza, raising serious questions about the effectiveness of the missile system.

After the deadly Israeli airstrikes and retaliatory Palestinian rocket attacks, the two sides reached a ceasefire agreement on Monday with the help of Egyptian and Qatari mediators.