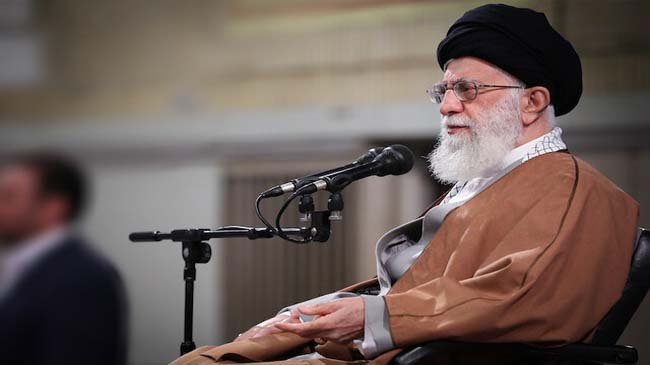 Ayatollah Imam Ali Khamenei, Leader of the Islamic Revolution, told a number of university professors and researchers on Wednesday that Quds Day rallies this year are “more important than any other year”.

The remarks by the Leader came and the Trump administration is set to announce its so-called “deal of the century”, which is intended to give more Palestinian lands to the Zionist regime of Israel.

On May 31, which is the lasting Friday of the fasting month of Ramadan, defenders of the Palestinians’ rights in Muslim and non-Muslim states pour into the streets to mark International Quds Day.

In an indirect references to certain Arab states which are cooperating with the U.S. to materialize “deal of the century”, the Leader said contrary to the wishes of Washington and its “followers” this project will also end in failure.

The strategy of Americans is not negotiation, rather it is pressure.”

Imam Khamenei  said, “Support for the Palestinian nation has humanitarian and religious aspects.”

“Deal of century” is also opposed by the European Union which is pushing for the formation of a Palestinian state alongside Israel.

According to leaked reports, U.S. President Donald Trump’s “deal of the century” will not include a Palestinian state.

Pointing to the recognition of al-Quds as the capital of Israel, Zarif said, “Al-Quds (Jerusalem) is neither America’s to give away nor Israel’s to take.”

The chief diplomat also said Quds is “NOT for brutal accomplices to try to buy.”

He added, “Quds belongs to Palestine and Palestinians: history shows that whomever ignores this is condemned to ignominious failure.

Ayatollah Amoli Sadeq Larijani, chairman of the Expediency Council, also said Muslims will not allow “deal of the century” to come true.

Elsewhere in his remarks, the Leader vehemently dismissed speculation and rumors of negotiations between Iran and the United States propagated by certain media outlets and “gossipers”, asserting that Iran will not negotiate with the United States because it is “useless” and “detrimental”.

The Trump administration has said it withdrew from the 2015 nuclear deal and returned sanctions on Iran in order to force Tehran to come the negotiating table. It has said that the deal does not include Iran’s defense industry, including missile program.

The Leader insisted that Iran will never negotiate on the most important national issues such as defense capability.

“We don’t negotiate about military capability.”

In this context, he said, the meaning of negotiation with the U.S. is that Iran compromise on its “defense capability”.

Imam Khamenei  said the U.S. is using sanctions pressure as a “strategy” to achieve its goals and presents this tactic as “negotiation”.

The Leader added, “The strategy of Americans is not negotiation, rather it is pressure.”

For the U.S., he said, negotiation is “pressure strategy”.

‘Production of nuclear arms is against sharia’

Once again, Imam Khamenei  insisted on his edict that production of weapons of mass destruction (WMDs), including nuclear arms, is haram (religiously banned).

“Our capability is nuclear and scientific and we don’t seek nuclear arms, not because of sanctions or America, but because we consider it as haram based on our sharia principles.”

Imam Khamenei  slammed those who consider producing nuclear weapons as a method of deterrence, saying, “Some have suggested producing but not using nuclear weapons. This is also wrong. We would spend a lot to produce them without using it and the enemy knows we would never use them. So they would be ineffective for us.”

‘Iran will take next nuclear steps if necessary’

On a ratification by the Supreme National Security Council (SNSC) according to which Iran decided from May 8 to partially suspend some of its commitments under the nuclear deal, the Leader said “stopping at this stage is meaningless” but for now it is enough and if necessary Iran will take the next steps.

The SNSC has given the remaining parties to the nuclear deal (Germany, France, Britain, China, and Russia) 60 days to decide to shield Iran from the U.S. sanctions otherwise Tehran will take the next steps.